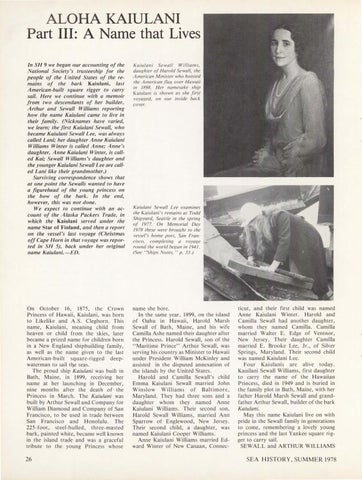 ALOHA KAIULANI Part III: A Name that Lives In SH 9 we began our accounting of the National Society&#39;s trusteeship for the people of the United States of the remains of the bark Kaiulani, last American-built square rigger to carry sail. Here we continue with a memoir from two descendants of her builder, Arthur and Sewall Williams reporting how the name Kaiulani came to live in their family. (Nicknames have varied, we learn; the first Kaiulani Sewall, who became Kaiulani Sewall Lee, was always called Lani; her daughter Anne Kaiulani Williams Winter is called Anne; Anne&#39;s daughter, Anne Kaiulani Winter, is called Kai; Sewall Williams&#39;s daughter and the younger Kaiulani Sewall Lee are called Lani like their grandmother.) Surviving correspondence shows that at one point the Sewalls wanted to have a figurehead of the young princess on the bow of the bark. In the end, however, this was not done. We expect to continue with an account of the Alaska Packers Trade, in which the Kaiulani served under the name Star of Finland, and then a report on the vessel&#39;s last voyage (Christmas off Cape Horn in that voyage was reported in SH 5), back under her original name Kaiulani.-ED.

On October 16, 1875, the Crown Princess of Hawaii, Kaiulani, was born to Likelike and A.S. Cleghorn. This name, Kaiulani, meaning child from heaven or child from the skies, later became a prized name for children born in a New England shipbuilding family, as well as the name given to the last American-built square-rigged deepwaterman to sail tl)e seas. The proud ship Kaiulani was built in Bath, Maine, in 1899, receiving her name at her launching in December, nine months after the death of the Princess in March. The Kaiulani was built by Arthur Sewall and Company for William Diamond and Company of San Francisco, to be used in trade between San Francisco and Honolulu. The 225-foot, steel-hulled, three-masted bark, painted white, became well known in the island trade and was a graceful tribute to the young Princess whose

name she bore. In the same year, 1899, on the island of Oahu in Hawaii, Harold Marsh Sewall of Bath, Maine, and his wife Camilla Ashe named their daughter after the Princess. Harold Sewall, son of the &quot;Maritime Prince&quot; Arthur Sewall, was serving his country as Minister to Hawaii under President William McKinley and assisted in the disputed annexation of the islands by the United States. Harold and Camilla Sewall&#39;s child Emma Kaiulani Sewall married John Winslow Williams of Baltimore, Maryland. They had three sons and a daughter whom they named Anne Kaiulani Williams. Their second son, Harold Sewall Williams, married Ann Sparrow of Englewood, New Jersey. Their second child, a daughter, was named Kaiulani Cooper Williams. Anne Kaiulani Williams married Edward Winter of New Canaan, Connec-

Kaiulani Sewall William s, daughter of Harold Sewall, the American Minister who hoisted the American flag over Hawaii in 1898. Her namesake ship Kaiulani is shown as she first voyaged, on our inside back cover.

ticut, and their first child was named Anne Kaiulani Winter. Harold and Camilla Sewall had another daughter, whom they named Camilla. Camilla married Walter E. Edge of Ventnor, New Jersey . Their daughter Camilla married E. Brooke Lee, Jr., of Silver Springs, Maryland. Their second child was named Kaiulani Lee. Four Kaiulanis are alive today. Kauilani Sewall Williams, first daughter to carry the name of the Hawaiian Princess, died in 1949 and is buried in the family plot in Bath, Maine, with her father Harold Marsh Sewall and grandfather Arthur Sewall, builder of the bark

Kaiulani. May this name Kaiulani live on with pride in the Sewall family in generations to come, remembering a lovely young princess and the last Yankee square riÂˇgger to carry sail. SEWALL and ARTHUR WILLIAMS