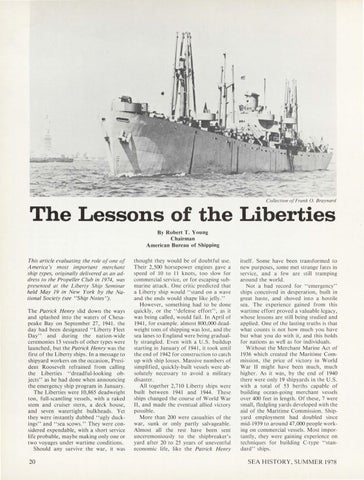 The Lessons of the Liberties By Robert T. Young Chairman American Bureau of Shipping

This article evaluating the role of one of America's most important merchant ship types, originally delivered as an address to the Propeller Club in 1974, was presented at the Liberty Ship Seminar held May 19 in New York by the National Society (see "Ship Notes"). The Patrick Henry slid down the ways and splashed into the waters of Chesapeake Bay on September 27, 1941. the day had been designated "Liberty Fleet Day" and during the nation-wide ceremonies 13 vesse ls of other types were launched, but the Patrick Henry was the first of the Liberty ships. In a message to shipyard workers on the occasion, President Roosevelt refrained from calling the Liberties "dreadful-looking objects" as he had done when announcing the emergency ship program in January. The Liberties were 10,865 deadweight ton, full- sca ntling vessels, with a raked stem and cruiser stern, a deck house, and seven watertight bulkheads. Yet they were instantly dubbed "ugly duckings" and "sea scows." They were considered expendable, with a short service life probable, maybe making only one or two voyages under wartime conditions. Should any survive the war, it was

thought they would be of doubtful use. Their 2,500 horse power engines gave a speed of 10 to 11 knot s, too slow for commercial servi ce, or for escaping submarine attack. One critic predicted that a Liberty ship would "stand on a wave and the ends would shape like jelly." However, so mething had to be done quickly, or the "defense effort", as it was being called, would fail. In April of 1941, for example. almost 800,000 deadweight ton s of shipping was lost, and the sea lanes to England were bein g gradually strangled. Even with a U.S. bui ldup starting in January of 1941, it took until the end of 1942 for construction to catch up with ship losses. Massive numbers of simplified , quickly-built vessels were absolutely necessary to avoid a military di sas ter. All together 2,710 Liberty ships were built between 1941 and 1944. These ships changed the course of World War I 1, and made the eventual allied victory possible . More than 200 were casualties of the war, sunk or only partly salvageable. Almost all the rest have been se nt unceremoniou sly to the shipbreaker's yard after 20 to 25 years of uneventful economic life, like the Patrick Henry

itself. Some have been transfo rmed to new purposes, so me met stran ge fates in service, and a few are still tramping around the world. Not a bad record for "emergenc y" ships conceived in desperation , built in great haste, a nd shoved into a hostile sea. The experience ga ined from this wartime e ffort proved a valuable legacy, whose lesso ns are still being studied and applied. One of the lasting truths is that what co unts is not how much yo u have but what you do with it, and this holds for nations as well as for individuals . Without th e Merchant Marine Act of 1936 which crea ted the Maritime Commission, the price of victory in World War II might have been much, much higher. As it was, by the end of 1940 there were only 19 shipyard s in the U.S. with a total of 53 berth s capable of building ocean-going merchant vessels over 400 feet in lengt h . Of these, 7 were small, nedgling yards developed with the ai d of the Maritime Commission. Shipyard employment had doubled since mid-1939 to around 47 ,000 people working on co mmercial vessels. Most importantly, they were gaining experience on techniques for building C-type "s tandard " ships.