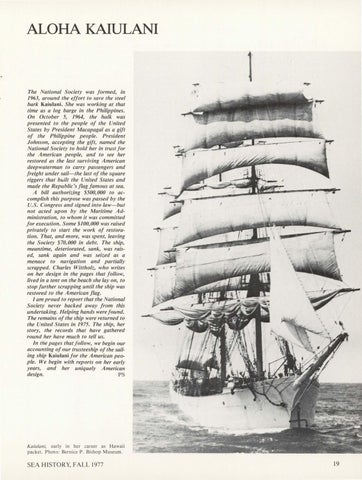 l The National Society was formed, in 1963, around the effort to save the steel bark Kaiulani. She was working at that time as a log barge in the Philippines. On October 5, 1964, the hulk was presented to the people of the United States by President Macapagal as a gift of the Philippine people. President Johnson, accepting the gift, named the National Society to hold her in trust for the American people, and to see her restored as the last surviving American deepwaterman to carry passengers and freight under sail-the last of the square riggers that built the United States and made the Republic&#39;s flag famous at sea. A bill authorizing $500,000 to accomplish this purpose was passed by the U.S. Congress and signed into law-but not acted upon by the Maritime Administration, to whom it was committed for execution. Some $100,000 was raised privately to start the work of restoration. That, and more, was spent, leaving the Society $70,000 in debt. The ship, meantime, deteriorated, sank, was raised, sank again and was seized as a menace to navigation and partially scrapped. Charles Wittholz, who writes on her design in the pages that follow, lived in a tent on the beach she lay on, to stop further scrapping until the ship was restored to the American flag. I am proud to report that the National Society never backed away from this undertaking. Helping hands were found. The remains of the ship were returned to the United States in 1975. The ship, her story, the records that have gathered round her have much to tell us. Jn the pages that follow, we begin our accounting of our trusteeship of the sailing ship Kaiulanifor the American people. We begin with reports on her early years, and her uniquely American PS design.