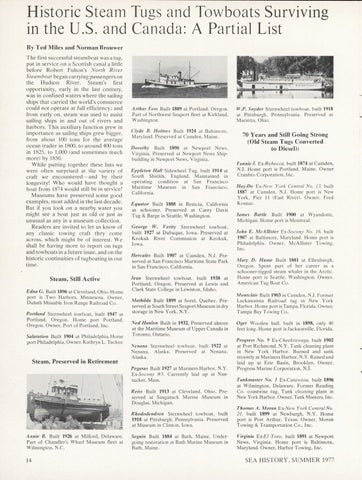 Historic Steam Tugs and Towboats Surviving in the U.S. and Canada: A Partial List By Ted Miles and Norman Brouwer The first successful steamboat was a tug , put in service on a Scottish canal a little before Robert Fulton&#39;s North River Steamboat began carrying passengers on the Hudson River. Steam &#39;s first opportunity, early in the last century, was in confined waters where the sailing ships that carried the world&#39;s commerce could not operate at full efficiency; and from early on, steam was used to assist sailing ships in and out of rivers and harbors. This auxiliary function grew in importance as sailing ships grew bigger, from about 100 tons for the average ocean trader in 1800, to around 400 tons in 1825, to 1,000 (and sometimes much more) by 1850. While putting together these lists we were often surprised at the variety of craft we encountered - and by their longevity! Who would have thought a boat from 1874 would still be in service! Museums have preserved some good examples, most added in the last decade. But if you look on a nearby water you might see a boat just as old or just as unusual as any in a museum collection. Readers are invited to let us know of any classic towing craft they come across, which might be of interest. We shall be having more to report on tugs and towboats in a future issue, and on the historic continuities of tugboating in our time.