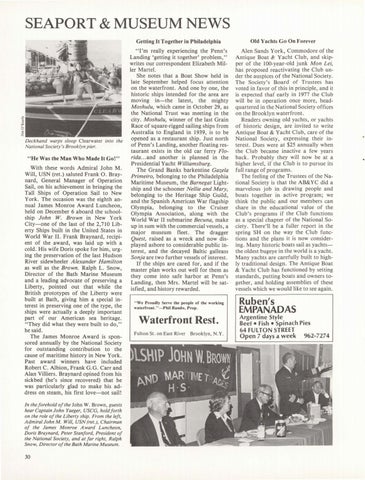 &quot;He Was the Man Who Made It Go!&quot; With these words Admiral John M. Will, USN (ret.) saluted Frank 0. Braynard, General Manager of Operation Sail, on his achievement in bringing the Tall Ships of Operation Sail to New York. The occasion was the eighth annual James Monroe Award Luncheon, held on December 6 aboard the schoolship John W. Brown in New York City-one of the last of the 2,710 Liberty Ships built in the United States in World War II. Frank Braynard, recipient of the award, was laid up with a cold. His wife Doris spoke for him, urging the preservation of the last Hudson River sidewheeler Alexander Hamilton as well as the Brown. Ralph L. Snow, Director of the Bath Marine Museum and a leading advocate of preserving a Liberty, pointed out that while the British prototypes of the Liberty were built at Bath, giving him a special interest in preserving one of the type, the ships were actually a deeply important part of our American sea heritage. &quot;They did what they were built to do,&quot; he said. The James Monroe Award is sponsored annually by the National Society for outstanding contribution to the cause of maritime history in New York. Past award winners have included Robert C. Albion, Frank G.G. Carr and Alan Villiers. Braynard opined from his sickbed (he&#39;s since recovered) that he was particularly glad to make his address on steam, his first love-not sail! In the forehold of the John W. Brown, guests hear Captain John Yaeger, USCG, hold forth on the role of the Liberty ship. From the left, Admiral John M. Will, USN (ret.), Chairman of the James Monroe A ward Luncheon, Doris Braynard, Peter Stanford, President of the National Society, and at far right, Ralph Snow, Director of the Bath Marine Museum.

Getting It Together in Philadelphia

&quot;I&#39;m really experiencing the Penn&#39;s Landing &#39;getting it together&#39; problem,&quot; writes our correspondent Elizabeth Miller Martel. She notes that a Boat Show held in late September helped focus attention on the waterfront. And one by one, the historic ships intended for the area are moving in-the latest, the mighty Moshu/u, which came in October 29, as the National Trust was meeting in the city. Moshu/u, winner of the last Grain Race of square-rigged sailing ships from Australia to England in 1939, is to be opened as a restaurant ship. Just north of Penn&#39;s Landing, another floating restaurant exists in the old car ferry Florida .. . and another is planned in the Presidential Yacht Williamsburg. The Grand Banks barkentine Gaze/a Primeiro, belonging to the Philadelphia Maritime Museum, the Barnegat Lightship and the schooner Nellie and Mary, belonging to the Heritage Ship Guild, and the Spanish American War flagship Olympia, belonging to the Cruiser Olympia Association, along with the World War II submarine Becuna, make up in sum with the commercial vessels, a major museum fleet. The dragger Quest, raised as a wreck and now displayed ashore to considerable public interest, and the decayed Baltic galleass Sonja are two further vessels of interest. If the ships are cared for, and if the master plan works out well for them as they come into safe harbor at Penn&#39;s Landing, then Mrs. Martel will be satisfied, and history rewarded.

Alen Sands York, Commodore of the Antique Boat &amp; Yacht Club, and skipper of the 100-year-old junk Mon Lei, has proposed reactivating the Club under the auspices of the National Society. The Society&#39;s Board of Trustees has voted in favor of this in principle, and it is expected that early in 1977 the Club will be in operation once more, headquartered in the National Society offices on the Brooklyn waterfront. Readers owning old yachts, or yachts of historic design, are invited to write Antique Boat &amp; Yacht Club, care of the National Society, expressing their interest. Dues were at $25 annually when the Club became inactive a few years back. Probably they will now be at a higher level, if the Club is to pursue its full range of programs. The feeling of the Trustees of the National Society is that the AB&amp;YC did a marvelous job in drawing people and boats together in active program; we think the public and our members can share in the educational value of the Club&#39;s programs if the Club functions as a special chapter of the National Society. There&#39;ll be a fuller report in the spring SH on the way the Club functions and the plans it is now considering. Many historic boats sail as yachtsthe oldest bugeye in the world is a yacht. Many yachts are carefully built to highly traditional design. The Antique Boat &amp; Yacht Club has functioned by setting standards, putting boats and owners together, and holding assemblies of these vessels which we would like to see again.