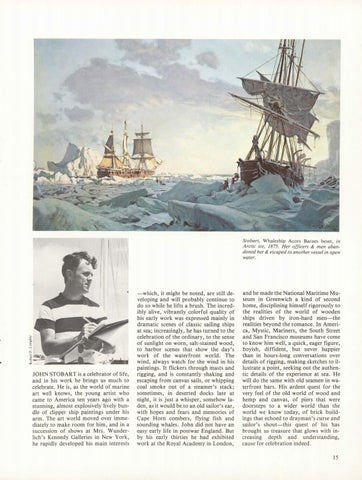 JOHN STOBART is a celebrator of life, and in his work he brings us much to celebrate. He is, as the world of marine art well knows, the young artist who came to America ten years ago with a stunning, almost explosively lively bundle of clipper ship paintings under his arm. The art world moved over immediately to make room for him, and in a succession of shows at Mrs. Wunderlich &#39;s Kennedy Galleries in New York, he rapidly developed his main interests

-which, it might be noted, are still developing and will probably continue to do so while he lifts a brush. The incredibly alive, vibrantly colorful quality of his early work was expressed mainly in dramatic scenes of classic sailing ships at sea; increasingly, he has turned to the celebration of the ordinary, to the sense of sunlight on worn, salt-stained wood, to harbor scenes that show the day&#39;s work of the waterfront world. The wind, always watch for the wind in his paintings. It flickers through masts and rigging, and is constantly shaking and escaping from canvas sails, or whipping coal smoke out of a steamer&#39;s stack; sometimes, in deserted docks late at night, it is just a whisper, somehow laden, as it would be to an old sailor&#39;s ear, with hopes and fears and memories of Cape Horn combers, flying fish and sounding whales. John did not have an easy early life in postwar England. But by his early thirties he had exhibited work at the Royal Academy in London,

and he made the National Maritime Museum in Greenwich a kind of second home, disciplining himself rigorously to the realities of the world of wooden ships driven by iron-hard men-the realities beyond the romance. In America, Mystic, Mariners, the South Street and San Francisco museums have come to know him well, a quick, eager figure, boyish, diffident, but never happier than in hours-long conversations over details of rigging, making sketches to illustrate a point, seeking out the authentic details of the experience at sea. He will do the same with old seamen in waterfront bars. His ardent quest for the very feel of the old world of wood and hemp and canvas, of piers that were doorsteps to a wider world than the world we know today, of brick buildings that echoed to drayman&#39;s curse and sailor&#39;s shout-this quest of his has brought us treasure that glows with increasing depth and understanding, cause for celebration indeed. 15