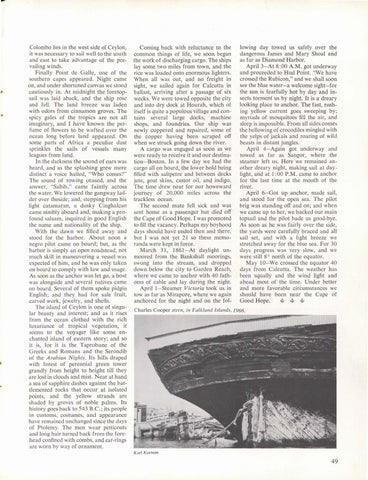 Colombo lies in the west side of Ceylon, it was necessary to sail well to the south and east to take advantage of the prevailing winds. Finally Point de Galle, one of the southern capes appeared. Night came on, and under shortened canvas we stood cautiously in. At midnight the foretopsail was laid aback, and the ship rose and fell. The land breeze was laden with odors from cinnamon groves. The spicy gales of the tropics are not all imaginary, and I have known the perfume of flowers to be wafted over the ocean long before land appeared. On some parts of Africa a peculiar dust sprinkles the sails of vessels many leagues from land. In the darkness the sound of oars was heard, and as the splashing grew more distinct a voice hailed, "Who comes?" The sound of rowing ceased, and the answer, "Sahib," came faintly across the water. We lowered the gangway ladder over theside; and, stepping from his light catamaran, a dusky Cinghalcao came nimbly aboard and, making a profound salaam, inquired in good English the name and nationality of the ship. With the dawn we filled away and stood for the harbor. About noon a negro pilot came on board; but, as the harbor is simply an open roadstead, not much skill in maneuvering a vessel was expected of him, and he was only taken on board to comply with law and usage. As soon as the anchor was let go, a boat was alongside and several natives came on board. Several of them spoke pidgin English; and they had for sale fruit, carved work, jewelry, and shells. The island of Ceylon is one of singular beauty and interest; and as it rises from the ocean clothed with the rich luxuriance of tropical vegetation, it seems to the voyager like some enchanted island of eastern story; and so it is, for it is the Taprobane of the Greeks and Romans and the Serondib of the Arabian Nights. Its hills draped with forest of perennial green tower grandly from height to height till they are lost in clouds and mist. Near at hand a sea of sapphire dashes against the battlemented rocks that occur at isolated points, and the yellow strands are shaded by groves of noble palms. Its history goes back to 543 B.C.; its people in customs, costumes, and appearance have remained unchanged since the days of Ptolemy. The men wear petticoats and long hair turned back from the forehead confined with combs, and ear-rings are worn by way of ornament.

Coming back with reluctance to the common things of life, we soon began the work of discharging cargo. The ships lay some two miles from town, and the rice was loaded onto enormous lighters. When all was out, and no freight in sight, we sailed again for Calcutta in ballast, arriving after a passage of six weeks. We were towed opposite the city and into dry dock at Hourah, which of itself is quite a populous village and contains several large docks, machine shops, and foundries. Our ship was newly coppered and repaired, some of the copper having been scraped off when we struck going down the river. A cargo was engaged as soon as we were ready to receive it and our destination-Boston. In a few day we had the cargo all on board, the lower hold being filled with saltpetre and between decks jute, goat skins, castor oil, and indigo. The time drew near for our howeward journey of 20,000 miles across the trackless ocean. The second mate fell sick and was sent home as a passenger but died off the Cape of Good Hope. I was promoted to fill the vacancy. Perhaps my boyhood days should have ended then and there, but I was not yet 21 so these memoranda were kept in force. March 31, 1861-At daylight unmoored from the Bankshall moorings, swung into the stream, and dropped down below the city to Garden Reach, where we came to anchor with 40 fathoms of cable and lay during the night. April I-Steamer Victoria took us in tow as far as Mirapore, where we again anchored for the night and on the fol-

lowing day towed us safely over the dangerous Jam es and Mary Shoal and as far as Diamond Harbor. April 3-At 8: 00 A.M. got underway and proceeded to Hud Point. "We have crossed the Rubicon," and we shall soon see the blue water-a welcome sight-for the sun is fearfully hot by day and insects torment us by night. It is a dreary looking place to anchor. The fast, rushing yellow current goes sweeping by; myriads of mosquitoes fill the air, and sleep is impossible. From all sides comes the bellowing of crocodiles mingled with the yelps of jackals and roaring of wild beasts in distant jungles. April 4-Again got underway and towed as far as Sangor, where the steamer left us. Here we remained another dreary night, making sail at daylight, and at 1 :00 P.M. came to anchor for the last time at the mouth of the river. April 6-Got up anchor, made sail, and stood for the open sea. The pilot brig was standing off and on; and when we came up to her, we backed our main topsail and the pilot bade us good-bye. As soon as he was fairly over the side, the yards were carefully braced and all sail set, and with a light breeze we stretched away for the blue sea. For 30 clays progress was very slow, and we were still 8Â° north of the equator. May 10-We crossed the equator 40 days from Calcutta. The weather has been squally and the wind light and ahead most of the time. Under better and more favorable circumstances we should have been near the Cape of .t .t .t Good Hope.