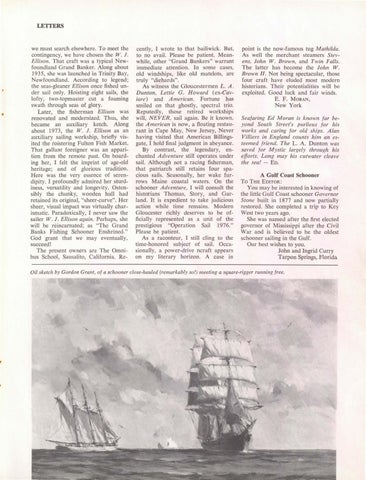 we must search elsewhere. To meet the contingency, we have chosen the W . J. Ellison. That craft was a typical Newfoundland Grand Banker. Along about 1935, she was launched in Trinity Bay, Newfoundland. According to legend; the seas-gleaner Ellison once fished under sail only. Hoisting eight sails, the lofty, two-topmaster cut a foaming swath through seas of glory. Later, the fisherman Ellison was renovated and modernized. Thus, she became an auxiliary ketch. Along about 1973, the W. J. Ellison as an auxiliary sailing workship, briefly visited the roistering Fulton Fish Market. That gallant foreigner was an apparition from the remote past. On boarding her, I felt the imprint of age-old heritage; and of glorious tradition. Here was the very essence of serendipity. I profoundly admired her sturdiness, versatility and longevity. Ostensibly the chunky, wooden hull had retained its original, &quot;sheer-curve&quot;. Her sheer, visual impact was virtually charismatic. Paradoxically, I never saw the sailer W . J. Ellison again. Perhaps, she will be reincarnated; as &quot;The Grand Banks Fishing Schooner Enshrined.&quot; God grant that we may eventually, succeed! The present owners are The Omnibus School, Sausalito, California. Re-

cently, I wrote to that bailiwick. But, to no avail. Please be patient. Meanwhile, other &quot;Grand Bankers&quot; warrant immediate attention. In some cases, old windships, like old matelots, are truly &quot;diehards&quot;. As witness the Gloucestermen L. A . Dunton, Lettie G. Howard (ex-Caviare) and American. Fortune has smiled on that ghostly, spectral trio. Reputedly, those retired workships will, NEVER, sail again. Be it known, the American is now, a floating restaurant in Cape May, New Jersey, Never having visited that American Billingsgate, I hold final judgment in abeyance. By contrast, the legendary, enchanted Adventure still operates under sail. Although not a racing fisherman, that patriarch still retains four spacious sails. Seasonally, her wake furrows Maine coastal waters. On the schooner Adventure, I will consult the histo&#39;rians Thomas, Story, and Garland. It is expedient to take judicious action while time remains. Modern Gloucester richly deserves to be officially represented as a unit of the prestigious &quot;Operation Sail 1976.&quot; Please be patient. As a raconteur, I still cling to the time-honored subject of sail. Occasionally, a power-drive ncraft appears on my literary horizon. A case in

point is the now-famous tug Mathilda . As well the merchant steamers Stevens, John W. Brown, and Twin Falls. The latter has become the John W. Brown II. Not being spectacular, those four craft have eluded most modern historians. Their potentialities will be exploited. Good luck and fair winds. E. F. MORAN, New York Seafaring Ed Moran is known far beyond South Street&#39;s purlieus for his works and caring for old ships. Alan Villiers in England counts him an esteemed friend. The L. A. Dunton was saved for Mystic largely throuRh his efforts. Long may his cutwater cleave the sea! - Eo.

A Gulf Coast Schooner To THE EDITOR: You may be interested in knowing of the little Gulf Coast schooner Governor Stone built in 1877 and now partially restored. She completed a trip to Key West two years ago. She was named after the first elected governor of Mississippi after the Civil War and is believed to be the oldest schooner sailing in the Gulf. Our best wishes to you. John and Ingrid Curry Tarpon Springs, Florida

Oil sketch by Gordon Grant, of a schooner close-hauled (remarkably so!) meeting a square-rigger running free.