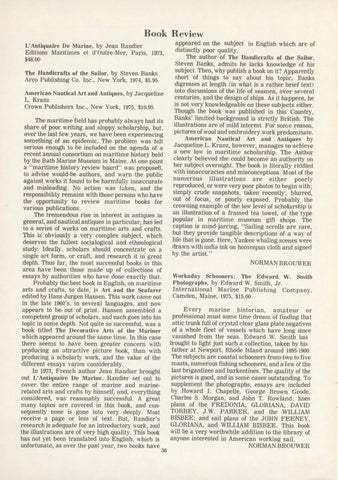 appeared on the subject in English which are of distinctly poor quality. The author of The Handicrafts of the Sailor, Steven Banks, admits he lacks knowledge of his subject. Then, why publish a book on it? Apparently short of things to · say about his topic, Banks digresses at length (in what is a rather brief text) into discussions of the life of seamen, over several ~enturies, and the design of ships. As it happens, he is not very knowledgeable on these subjects either. Though the book was published in this Country, Banks' limited background is strictly British. The illustrations are of mild interest. For some reason, pictures of wool and embroidery work predominate. ,-\merican Nautical Art and Antiques by Jacqueline L. Kranz, however, manages to achieve a new low in maritime scholarship. The Author clearly believed she could become an authority on her subject overnight. The book is literally riddled with innaccuracies and misconceptions. Most of the numerous illustrations are either poorly r~produced, or were very poor photos to begin with ; simply crude snapshots, taken recently ; blurred, out of focus, or poorly exposed. Probably the crowning example of the low level of scholarship is an illustration of a framed tea towel, of the type popular in maritime museum gift shops. The caption is mind-jarring, "Sailing scrolls are rare, but they provide tangible descriptions of a way of life that is gone. Here, Yankee whaling scenes were drawn with india ink on homespun cloth and signed by the artist." NORMAN BROUWER

The maritime field has probably always had its share of poor writing and sloppy scholarship, but, over the last few years, we have been experiencing something of an epidemic. The problem was felt serious enough to be included on the agenda of a recent annual consortium on maritime history held by the Bath Marine Museum in Maine. At one point a "maritime history review board" was proposeH, to advise would-be authors, and warn the public against works it found to be harmfully innaccurate and misleading. No action was taken, and the responsibility remains with those' persons who have the opportunity to review maritime books for various publications. · The tremendous rise in interest in antiques in general, and nautical antiques in particular, has led to a series of works on maritime arts and crafts. This is obviously a very complex subject, which deserves the fullest socialogical and ethnological study. Ideally, scholars should concentrate on a single art form, or craft, and research it in great depth . Thus far, the most successful books in this area have been those made up of collections of Workaday Schooners; The Edward W. Smith essays by authorities who have done exactly that. Photographs, by Edward W. Smith, Jr. Probably the best book in English, on maritime Internation~l Marine Publishing Company, arts and crcifts, to date, is Art and the Seafarer Camden, Mame, 1975, $15.00 edited by Hans Jurgen Hansen. This work came out in the late 1960's, in several languages, and now Every marine historian , amateur or appears to be, out of print. Hansen assembled a professional must some time dream of finding that competent group of scholars, and each goes into his attic trunk full of crystal clear glass plate negatives topic in some depth. Not quite so successful, was a of a whole fleet of vessels which have long since book titled The Decorative Arts of the Mariner vanished from the seas. Edward W. Smith has which appeared around the same time. In this case there seems to have been greater concern with lrought to light just such a collection, taken by his father at Newport, Rhode Island around 1895-1900. prpducing an attractive picture book, than with The subjects are coastal schooners from two.to five producing a scholarly work, and the value of the masts, numerous fishing schooners, and a few of the different essays varies considerably. last brigantines and barkentines. The quality of the In 1973, French author Jean Randier brought pictures is good, and in some cases outstanding. To out L' Antiquaire De Marine. Randier set out to supplement the photographs, essays are included cover the entire range of marine and marineby Howard I. Chapelle, George Brown Goode, related arts and crafts by himself, and, everything Charles S. Morgan, and John T. Rowland ; lines considered, was reasonably successful. A great plans of the FREDONIA, GLORIANA, DAVID many topics are covered in this book, and conTORREY, J .W. PARKER, and the WILLIAM sequently none is gone into very deeply. Most BISBEE; and sail plans of the JOHN FEENEY receive a page or less of text. But, Randier's GLORIANA, and WILLIAM BISBEE. This book research is adequate for an introductory work, and will be a very worthwhile addition to the library of the illustrations are of very high quality. This book anyone interested in American working sail. has not yet been translated into English, which is unfortunate, as over the past year, two books have . NORMAN BROUWER 36