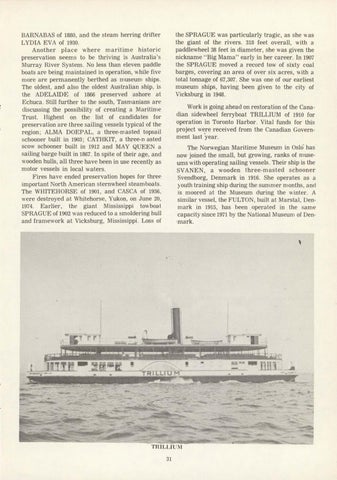 BARNABAS of 1880, and the steam herring drifter LYDIA EVA of 1930. Another place where maritime histor.ic preservation seems to be thriving is Australia &#39;s Murray River System. No less than eleven paddle boats are being maintained in operation, while five more are permanently berthed as museum ships. The oldest, and also the oldest Australian ship, is the ADELAIDE of 1866 preserved ashore at Echuca. Still further to the south, Tasmanians are discussing the possibility of creating a Maritime Trust. Highest on the list of candidates for preservation are three sailing vessels typical of the region; ALMA DOEPAL, a three-masted topsail schooner built in 1903; CATHKIT, a three-n Âˇasted scow schooner built in 1912 and MAY QUEEN a sailing barge built in 1867. In spite of their age, and wooden hulls, all three have been in use recently as motor vessels in local waters. Fires have ended preservation hopes for three important North American sternwheel steamboats. The WHITEHORSE of 1901 , and CASCA of 1936, were destroyed at Whitehorse, Yukon, on June 20, 1974. Earlier, the giant Mississippi towboat SPRAGUE of 1902 was reduced to a smoldering hull and framework at Vicksburg, Mississippi. Loss of

the SPRAGUE was particularly tragic, as she was the giant of the rivers. 318 feet overall, with a paddlewheel 38 feet in diameter, she was given the nickname &quot; Big Mama&quot; early in her career. In 1907 the SPRAGUE moved a record tow of sixty coal barges, covering an area of over six acres, with a total tonnage of 67,307. She was one of our earliest museum ships, having been given to the city of Vicksburg in 1948. Work is going ahead on restoration of the Canadian sidewheel ferryboat TRILLIUM of 1910 for operation in Toronto Harbor. Vital funds for this project were received from the Canadian Government last &#39;year. The Norwegian Maritime Museum in Oslo has now joined the small, but growing, ranks of museums with operating sailing vessels. Their ship is the SVANEN, a wooden three ~ masted schooner Svendborg, Denmark in 1916. She operates as a youth training ship during the summer months, and is moored at the Museum during the winter. A similar vessel, the FULTON, built at Marstal, Denmark in 1915, has been operated in the same capacity since 1971 by the National Museum of Den1mark.