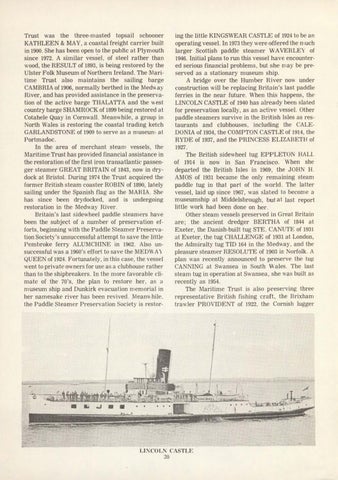 Trust was the three-masted topsail schooner KATHLEEN &amp; MAY, a coastal freight carrier built in 1900. She has been open to the public at Plymouth since 1972. A similar vessel, of steel rather than wood, the RESULT of 1893, is being restored by the Ulster Folk Museum of Northern Ireland. The Maritime Trust also maintains the sailing barge CAMBRIA of 1906, normally berthed in the Medway River, and has provided assistance in the preservation of the active barge THALATTA and the west country barge SHAMROCK of 1899 being restored at Cotahele Quay in Cornwall. Meanwhile, a group in North Wales is restoring the coastal trading ketch GARLANDSTONE of 1909 to serve as a museun1 at Portmadoc. In the area of merchant steam vessels, the Maritime Trust has provided financial assistance in the restoration of the first iron transatlantic passenger steamer GREAT BRITAIN of 1843, now in drydock at Bristol. During 1974 the Trust acquired the former British steam coaster ROBIN of 1890, lately sailing under the Spanish flag as the MARIA. She has since been drydocked, and is undergoing restoration in the Medway River. Britain&#39;s last sidewheel paddle steamers have been the subject of a number of preservation efforts, beginning with the Paddle Steamer Preservation Society&#39;s unsuccessful attempt to save the little Pembroke ferry ALUMCHINE in 1962. Also unsuccessful was a 1960&#39;s effort to save the MEDWAY QUEEN of 1924. Fortunately, in this case, the vessel went to private owners for use as a clubhouse rather than to the shipbreakers. In the more favorable climate of the 70&#39;s, the plan to restore her. as a museum ship and Dunkirk evacuation memorial in her namesake river has been revived. Meanwhile. the Paddle Steamer Preservation Society is restor-

ing the little KINGSWEAR CASTLE of 1924 to be an operating vessel. In 1973 they were offered the much larger Scottish paddle steamer WA VERLEY of 1946. Initial plans to run this vessel have encountered serious financial problems, but she may be preserved as a stationary museum ship. A bridge over the Humber River now under construction will be replacing Britain&#39;s last paddle ferries in the near future. When this happens, the LINCOLN CASTLE of 1940 has already been slated for preservation locally, as an active vessel. Other paddle steamers survive in the British Isles as restaurants and clubhouses, including the CALEDONIA of 1934, the COMPTON CASTLE of 1914, the RYDE of 1937, and the PRINCESS ELIZABETH of 1927. The British sidewheel tug EPPLETON HALL of 1914 is now in San Francisco. When she departed the British Isles in 1969 the JOHN H. AMOS of 1931 became the only remaining steam paddle tug in that part of the world. The latter vessel, laid up since 1967, was slated to become a museumship at Middelsbrough, but at last report little work had been done on her. Other steam vessels preserved in Great Britain are; the ancient dredger BERTHA of 1844 at Exeter, the Danish-built tug STE. CANUTE of 1931 at Exeter, the tug CHALLENGE of 1931 at London, the Admiralty tug TID 164 in the Medway, and the pleasure steamer RESOLUTE of 1903 in Norfolk. A plan was recently announced to preserve the tug CANNING at Swansea in South Wales. The last steam tug in operation at Swansea, she was built as recently as 1954. The Maritime Trust is also preserving three representative British fishing craft, the Brixham trawler PROVIDENT of 1922, the Cornish lugger 1