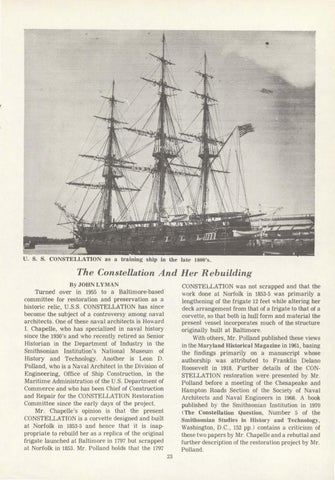 U. S. S. CONSTELLATION as a training ship in the late ISOO's.

The Constellation And Her Rebuilding By JOHN LYMAN Turned over in 1955 to a Baltimore-based committee for restoration and preservation as a historic relic, U.S.S. CONSTELLATION has since become the subject of a controversy among naval architects. One of these naval architects is Howard I. Chapelle, who has specialized in naval history since the 1930's and who recently retired as Senior Historian in the Department of Industry in the Smithsonian Institution's National Museum of History and Technology. Another is Leon D. Polland, who is a Naval Architect in the Division of Engineering, Office of Ship Construction, in the Maritime Administration of the U.S. Department of Commerce and who has been Chief of Construction and Repair for the CONSTELLATION Restoration Committee since the early days of the project. Mr. Chapelle's opinion is that the present CONSTELLATION is a corvette designed and built at Norfolk in 1853-5 and hence that it is inappropriate to rebuild her as a replica of the original frigate launched at Baltimore in 1797 but scrapped at Norfolk in 1853. Mr. Polland holds that the 1797

CONSTELLATION was not scrapped and that the work done at Norfolk in 1853-5 was primarily a lengthening of the frigate 12 feet while altering her deck arrangement from that of a frigate to that of a corvette, so that bQth in hull form and material the present vessei incorporates much of the structure originally built at Baltimore. With others, Mr. Polland published these views in the Maryland Historical Magazine in 1961, basing the findings primarily on a manuscript whose authorship was attributed to Franklin Delano Roosevelt in 1918. Further details of the CONSTELLATION restoration were presented by Mr. Polland before a meeting of the Chesapeake and Hampton Roads Section of the Society of Naval Architects and Naval Engineers in 1966. A book published by the Smithsonian Institution in 1970 <The Constellation Question, Number 5 of the Smithsonian Studies in History and Technology, Washington, D.C., 152 pp.) contains a criticism of these two papers by Mr. Chapelle and a rebuttal and further description of the restoration project by Mr. Polland. 23