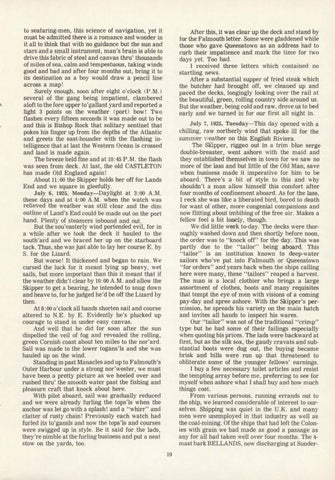 to seafaring-men, this science of navigation, yet it must be admitted there is a romance and wonder in it all to think that with no guidance but the sun and stars and a small instrument, man's brain is able to drive this fabric of steel and canvas thru' thousands of miles of sea, calm and tempestuous, taking winds good and bad and after four months out, bring it to its destination as a boy would draw a pencil line across a map! Surely enough, soon after eight o'clock (P.M.) several of the gang being impatient, clambered aloft to the fore upper to' gallant yard and reported a light 3 points on the weather (port) bow! Two flashes every fifteen seconds it was made out to be and this is Bishop Rock that solitary sentinel that pokes his finger up from the depths of the Atlantic and greets the east-bounder with the flashing intelligence that at last the Western Ocean is crossed and land is made again. The breeze held fine and at 10:45 P .M. the flash was seen from deck. At last, the old CASTLETON has made Old England again! About 11: 00 the Skipper holds her off for Lands End and we square in gleefully. July 6, 1925, Monday-Daylight at 3:00 A.M. these days and at 4:00 A.M. when the watch was relieved the weather was stln clear and the dim outline of Land's End could be made out on the port hand. Plenty of steamers inbound and out. But the sou' easterly wind portended evil, for in a while after we took the deck it hauled to the south'ard and we braced her up on the starboard tack. Thus, she was just able to lay her course E. by S. for the Lizard. But worse! It thickened and began to rain. We cursed the luck for it meant lying up heavy, wet sails, but more important than this it meant that if the weather didn't clear by 10:00 A.M. and allow the Skipper to get a bearing, he intended to snug down and heave to, for he judged he'd be off the Lizard by then. At 8: 00 o'clock all hands shorten sail and course altered to N.E. by E. Evidently he's plucked up courage to stand in under easy canvas. And well that he did for soon after the sun dispelled the veil of fog and revealed the rolling, green Cornish coast about ten miles to the nor'ard. Sail was made to the lower togans'ls and she was hauled up on the wind. Standing in past Manacles and up to Falmouth's Outer Harbour under a strong nor'wester, we must have been a pretty picture as we heeled over and rushed thru' the smooth water past the fishing and pleasure craft that knock about here. With pilot aboard, sail was gradually reduced and we were already furling the tops'ls when the anchor was let go with a splash! and a "whirr" and clatter of rusty chain! Previously each watch had furled its to'gansls and now the tops'ls and courses were swigged up in style. Be it said for the lads, they're nimble at the furling business and put a neat stow on the yards, too.

After this, it was clear up the deck and stand by for the Falmouth letter. Some were gladdened while those who gave Queenstown as an address had to curb their impatience and mark the time for two days yet. Too bad. I received three letters which contained no startling news. After a substantial supper of fried steak which the butcher had brought off, we cleaned up and paced the decks, longingly looking over the rail at the beautiful, green, rolling country side around us. But the weather, being cold and raw, drove us to bed early and we turned in for our first all night in. July 7, 1925, Tuesday-This day opened with a chilling, raw northerly wind that spoke ill for the summer n eather on this English Riviera. The Si{ipper, riggea out in a trim blue serge double-breaster, went ashore with the maid and they established themselves in town for we saw no more of the lass and but little of the Old Man, save when business made it imperative for him to be aboard. There's a bit of style to this and why shouldn't a man allow himself this comfort after four months of confinement aboard. As for the lass, I reek she was like a liberated bird, bored to death for want of other, more congenial companions and now flitting about imbibing of the free air. Makes a fellow feel a bit lonely, though. We did little wm-k to-day. The decks were thoroughly washed down and then shortly before noon, the order was to "knock off" for the day. This was partly due to the "tailor" being aboard. This "tailor" is an institution known to deep-water sailors who've put into Falmouth or Queenstown "for orders" and years back when the ships calling here were many, these "tailors" reaped a harvest. The man is a local clothier who brings a large assortment of clothes, boots and many requisites that tempt the eye of men with visions of a coming pay-day and spree ashore. With the Skipper's permission, he spreads his variety on the main hatch and invites all hands to inspect his wares. Our "tailor" was not of the traditional "crimp" type but he had some of their failings especially when quoting his prices. The lads were backward at first, but as the silk sox, the gaudy cravats and substantial boots were dug out, the buying became brisk and bills were run up that threatened to obliterate some of the younger fellows ' earnings. I buy a few necessary toilet articles and resist the tempting array before me, preferring to see for myself when ashore what I shall buy and how much things cost. From various persons, running errands out to the ship, we learned considerable of interest to ourselves. Shipping was quiet in the U.K. and many men were unemployed in that industry as well as the coal-mining. Of the ships that had left the Colonies with grain we had made as good a passage as any for all had taken well over four months. The 4mast bark BELLANDS, now discharging at Sunder19