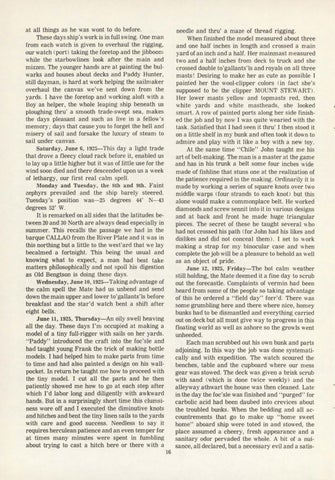 at all things as he was wont to do before. These days ship's work is in full swing. One man from each watch is given to overhaul the rigging, our watch (port) taking the foretop and the jibboom while the starbowlines look after the main and mizzen. The younger hands are at painting the bulwarks and houses about decks and Paddy Hunter, still dayman, is hard at work helping the sailmaker overhaul the canvas we've sent down from the yards. I have the foretop and working aloft with a Boy as helper, the whole leaping ship beneath us ploughing thru' a smooth trade-swept sea, makes the days pleasant and such as live in a fellow's memory; days that cause you to forget the hell and misery of sail and forsake the luxury of steam to sail under canvas. Saturday, June 6, 1925-This day a light trade that drove a fleecy cloud rack before it, enabled us to lay up a little higher but it was of little use for the wind soon died and there descended upon us a week of lethargy, our first real calm spell. Monday and Tuesday, the 8th and 9th. Faint zephyrs prevailed and the ship barely steered. Tuesday's position was-25 degrees 44' N-43 degrees 52' W. It is remarked on all sides that the latitudes between 20 and 30 North are always dead especially in summer. This recalls the passage we had in the barque CALLAO from the River Plate and it was in this northing but a little to the west'ard that we lay becalmed a fortnight. This being the usual and knowing what to expect, a man had best take matters philosophically and not spoil his digestion as Old Bengtson is doing these days. Wednesday, June 10, 1925-Taking advantage of the calm spell the Mate had us unbend and send down the main upper and lower to'gallants'ls before breakfast and the star'd watch bent a shift after eight bells. June 11, 1925, Thursday-An oily swell heaving all the day. These days I'm occupied at making a model of a tiny full-rigger with sails on her yards. "Paddy" introduced the craft into the foc'sle and had taught young Frank the trick of making bottle models. I had helped him to make parts from time to time and had also painted a design on his wallpocket. In return he taught me how to proceed with the tiny model. I cut all the parts and he then patiently showed me how to go at each step after which I'd labor long and diligently with awkward hands. But in a surprisingly short time this clumsiness wore off and I executed the diminutive knots and hitches and bent the tiny linen sails to the yards with care and good success. Needless to say it requires herculean patience and an even temper for at times many minutes were spent in fumbling about trying to cast a hitch here or there with a

needle and thru' a maze of thread rigging. When finished the model measured about three and one half inches in length and crossed a main yard of an inch and a half. Her mainmast measured two and a half inches from deck to truck and she crossed double to'gallants'ls and royals on all three masts! Desiring to make her as cute as possible I painted her the wool-clipper colors (in fact she's supposed to be the clipper MOUNT STEWART). Her lower masts yellow and topmasts red, then white yards and white mastheads, she looked smart. A row of painted ports along her side finished the job and by now I was quite wearied with the task. Satisfied that I had seen it thru' I then stood it on a little shelf in my bunk and often took it down to admire and play with it like a boy with a new toy. At the same time "Chile" John taught me his art of belt-making. The man is a master at the game and has in his trunk a belt some four inches wide made of fishline that stuns one at the realization of the patience required in the making. Ordinarily it is made by working a series of square knots over two middle warps (four strands to each knot) but this alone would make a commonplace belt. He worked diamonds and screw sennit into it in various designs and at back and front he made huge triangular pieces. The secret of these he taught several who had not crossed his path (for John had his likes and dislikes and did not conceal them). I set to work making a strap for my binocular case and when complete the job will be a pleasure to behold as well as an object of pride. June 12, 1925, Friday-The hot calm weather still holding, the Mate deemed it a fine day to scrub out the forecastle. Complaints of vermin had been heard from some of the people so taking advantage of this he ordered a "field day" forr'd. There was some grumbling here and there where nice, homey bunks had to be dismantled and everything carried out on deck but all must give way to progress in this floating world as well as ashore so the growls went unheeded. Each man scrubbed out his own bunk and parts adjoining. In this way the job was done systematically and with expedition. The watch scoured the benches, table and the cupboard where our mess gear was stowed. The deck was given a brisk scrub with sand (which is done twice weekly) and the alleyway athwart the house was then cleaned. Late in the day the foc'sle was finished and "purged" for carbolic acid had been daubed into crevices about the troubled bunks. When the bedding and all accountrements that go to make up "home sweet home" aboard ship were toted in and stowed, the place assumed a cheery, fresh appearance and a sanitary odor pervaded the whole. A bit of a nuisance, all declared, but a necessary evil and a satis16