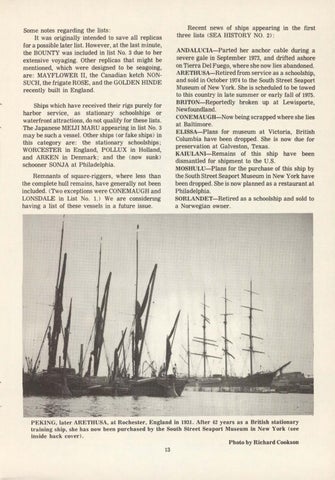 Some notes regarding the lists: It was originally intended to save all replicas for a possible later list. However, at the last minute, the BOUNTY was included in list No. 3 due to her extensive voyaging. Other replicas that might be mentioned, which were designed to be seagoing, are: MAYFLOWER II, the Canadian ketch NONSUCH, the frigate ROSE , and the GOLDEN HINDE recently built in England. Ships which have received their rigs purely for harbor service, as stationary schoolships or waterfront attractions, do not qualify for these lists. .The Japanese MEIJI MARU appearing in list No. 3 may be such a vessel. Other ships (or fake ships) in this category are: the stationary schoolships ; WORCESTER in England, POLLUX in Holland, and ARKEN in Denmark; and the (now sunk) schooner SONJA at Philadelphia. Remnants of square-riggers, where less than the complete hull remains, have generally not been included. (Two exceptions were CONEMAUGH and LONSDALE in List No. 1.) We are considering having a list of these vessels in a future issue.

Recent news of ships appearing in the first three lists (SEA HISTORY NO. 2) : ANDALUCIA-Parted her anchor cable during a severe gale in September 1973, and drifted ashore on Tierra Del Fuego, where she now lies abandoned. ARETHUSA-Retired from service as a schoolship, and sold in October 1974 to the South Street Seaport Museum of New York. She is scheduled to be towed to this country in late summer or early fall of 1975. BRITON-Reportedly broken up at Lewisporte, Newfoundland. CONEMAUGH-Now being scrapped where she lies at Baltimore . ELISSA-Plans for museum at Victoria, British Columbia have been dropped. She is now due for preservation at Galveston, Texas. KAIULANI-Remains of this ship have been dismantled for shipment to the U.S . MOSHULU-Plans for the purchase of this ship by the South Street Seaport Museum in New York have been dropped. She is now planned as a restaurant at Philadelphia. SORLANDET-Retired as a schoolship and sold to a Norwegian owner.

PEKING, later ARETHUSA, at Rochester, England in 1931. After 42 years as a British stationary training ship, she has now been purchased by the South Street Seaport Museum in New York (see inside back cover). Photo by Richard Cookson 13