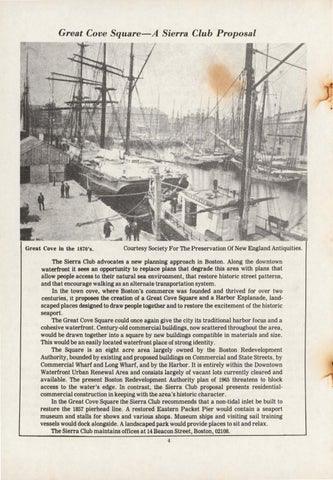 Courtesy Society For The Preservation Of New England Antiquities.

The Sierra Club advocates a new planning approach in Boston. Along the downtown waterfront it sees an opportunity to replace plans that degrade this area with plans that allow people access to their natural sea environment, that restore historic street patterns, and that encourage walking as an alternate transportation system. In the town cove, where Boston&#39;s commerce was founded and thrived for over two centuries, it proposes the creation of a Great Cove Square and a Harbor Esplanade, landscaped places designed to draw people together and to restore the excitement of the historic seaport. The Great Cove Square could once again give the city its traditional harbor focus and a cohesive waterfront. Century-old commercial buildings, now scattered throughout the area , would be drawn together into a square by new buildings compatible in materials and size. This would be an easily located waterfront place of strong identity. The Square is an eight acre area largely owned by the Boston Redevelopment Authority, bounded by existing and proposed buildings on Commercial and State Streets, by Commercial Wharf and Long Wharf, and by the Harbor. It is entirely within the Downtown Waterfront Urban Renewal Area and consists largely of vacant lots currently cleared and available. The present Boston Redevelopment Authority plan of 1965 threatens to Wock access to the water&#39;s edge. In contrast, the Sierra Club proposal presents residentialcommercial construction in keeping with the area&#39;s historic character. In the Great Cove Square the Sierra Club recommends that a non-tidal inlet be built to restore the 1857 pierhead line. A restored Eastern Packet Pier would contain a seaport museum and stalls for shows and various shops. Museum ships and visiting sail training vessels would dock alongside. A landscaped park would provide places to sit and relax. The Sierra Club maintains offices at 14 Beacon Street, Boston, 02108. 4