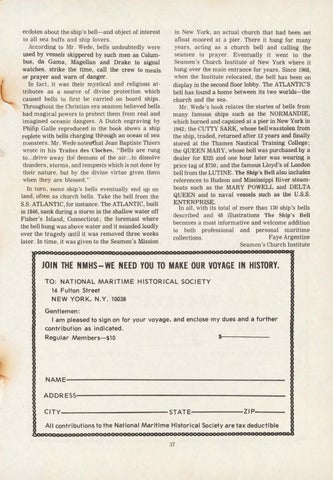 ecdotes about the ship&#39;s bell-and object of interest to all sea buffs and ship lovers . According to Mr. Wede , bells undoubtedly were used by vessels skippered by such men as Columbus, da Gama, Magellan and Drake to signal watches. strike the time, call the crew to meals or prayer and warn of danger. In fact, it was their mystical and religious attributes as a source of divine protection which caused bells to first be carried on board ships. Throughout the Christian era seamen believed bells had magical powers to protect them from real and imagined oceanic dangers. A Dutch engraving by Philip Galle reproduced in the book shows a ship replete with bells charging through an ocean of sea monsters. Mr. Wede note$)\(hat Jean Baptiste Thiers wrote in his Traitez des Cloches, &quot;Bells are rung to ... drive away the demons of the air ... to dissolve thunders, storms , and tempests which is not done by their nature, but by the divine virtue given them when they are blessed.&quot; In turn , some ship&#39;s bells eventually end up on land , often as church bells . Take the bell from the S.S . ATLANTIC, for instance. The ATLANTIC, built in 1846, sank during a storm in the shallow water off Fisher&#39;s Island, Connecticut ; the foremast where the bell hung was above water and it sounded.loudly over the tragedy until it was removed three weeks later. In time, it was given to the Seamen&#39;s Mission

in New York, an actual church that had been set afloat moored at a pier. There it hung for many years, acting as a church bell and calling the seamen to prayer. Eventually it went to the Seamen&#39;s Church Institute of New York where it hung over the main entrance for years. Since 1968, when the Institute relocated, the bell has been on display in the second floor lobby. The ATLANTIC&#39;S bell has found a home between its two worlds-the church and the sea. Âˇ Mr. Wede&#39;s book relates the stories of bells from many famous ships such as the NORMANDIE, which burned and capsized at a pier in New York in 1942 ; the CUTTY SARK, whose bell was stolen from the ship, traded , returned after 12 years and finally stored at the Thames Nautical Training College; the QUEEN MARY, whose bell was purchased.ey a dealer for $325 and one hour later was wearing a price tag of $750; and the famous Lloyd&#39;s of London bell from the LUTINE. The Ship&#39;s Bell also includes references to Hudson and Mississippi River .steamboats such as the MARY POWELL and DELTA QUEEN and to naval vessels such as the U.S.S. ENTERPRISE. In all, with its total of more than 130 ship&#39;s bells described and 48 illustrations The Ship&#39;s Bell becomes a most informative and welcome addition to both professional and personal maritime collections . Faye Argentine Seamen &#39;s Church Institute

JOIN THE NMHS-WE NEED YOU TO MAKE OUR VOYAGE IN HISTORY. TO: NATIONAL MARITIME HISTORICAL SOCIETY 16 Fulton Street NEW YORK, N.Y. 10038 Gentlemen: I am pleased to sign on for your voyage, and enclose my dues and a further contribution as indicated. Regular Members-$10