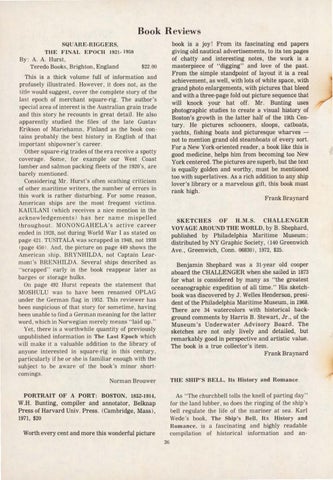 book is a joy! From its fascinating end papers giving old nautical advertisements, to its ten pages of chatty and interesting notes, the work is a masterpiece of &quot;digging&quot; and love of the past. From the simple standpoint of layout it is a real achievement, as well, with lots of white space, with grand photo enlargements, with pictures that bleed and with a three-page fold out picture sequence that will knock your hat off. Mr . Bunting uses photographic studies to create a visual history of Boston&#39;s growth in the latter half of the 19th Century. He pictures schooners , sloops, catboats, yachts, fishing boats and picturesque wharves not to mention grand old steamboats of every sort. For a New York-oriented reader, a book like this is good medicine, helps him from becoming too New York centered. The pictures are superb, but the text is equally golden and worthy , must be mentioned too with superlatives . As a rich addition to any ship lover&#39;s library or a marvelous gift , this book must rank high. Frank Braynard

This is a thick volume full of information and profusely illustrated . However, it does not, as the title would suggest, cover the complete story of the last epoch of merchant square-rig. The author &#39;s special area of interest is the Australian grain trade and this story he recounts in great detail. He also apparently studied the files of the late Gustav Erikson of Mariehamn , Finland as the book con tains probably the best history in English of that important shipowner &#39;s career. Other square-rig trades of the era receive a spotty coverage . Some , for example our West Coast lumber and salmon packing fleets of the 1920&#39;s , are barely mentioned. Considering Mr . Hurst &#39;s often scathing criticism of other maritime writers, the number of errors in this work is rather disturbing . For some reason , American ships are the most frequent victims . KAIULANI (which receives a nice mention in the acknowledgements l has her name mi spelled throughout. MONONGAHELA &#39; s active career ended in 1928, not during World War I as stated on page 421. TUSITALA was scrapped in 1948, not 1938 (page 450). And , the picture on page 449 shows the American ship , BRYNHILDA , not Captain Learmont &#39;s BRENHILDA. Several ships described as &quot;scrapped &quot; early in the book reappear later as barges or storage hulks . On page 492 Hurst repeats the statement that MOSHULU was to have been renamed OPLAG under the Germ an flag in 1952. This reviewer has been suspicious of that story for sometime, having been unable to find a German meaning for the latter word , which in Norwegian merely means &quot;laid up.&quot; Yet , there is a worthwhile quantity of previously unpublished information in The Last Epoch which will make it a valuable addition to the library of anyone interested in square-rig in this century, particularly if he or she is familiar enough with the subject to be aware of the book&#39;s minor shortcomings . Norman Brouwer

SKETCHES OF H.M.S. CHALLENGER VOYAGE AROUND THE WORLD , by B. Shephard, published by Philadelphia Maritime Museum ; distributed by NY Graphic Society , (140 Greenwich Ave., Greenwich, Conn. 06830 ), 1972, $25. Benjamin Shephard was a 31-year old cooper aboard the CHALLENGER when she sailed in 1873 for what is considered by many as &quot;the greatest oceanographic expedition of all time .&quot; His sketchbook was discovered by J. Welles Henderson , president of the Philadelphia Maritime Museum,.in 1968. There are 34 watercolors with historical background comments by Harris B. Stewart, Jr., of the Museum &#39; s Underwater Advisory Board. The sketches are not only lively and detailed, but remarkably good in perspective and artistic value. The book is a true collector &#39;s item . Frank Braynard

THE SHIP&#39;S BELL, Its History and Romance.

As &quot; The church bell tolls the knell of parting day &quot; for the land lubber , so does the ringing of the ship &#39;s bell regulate the life of the mariner at sea . Karl Wede &#39;s book , The Ship&#39;s Bell, Its History and Homance , is a fascinating and highly readable compilation of historical information and an-

Worth every cent and more this wonderful picture 36