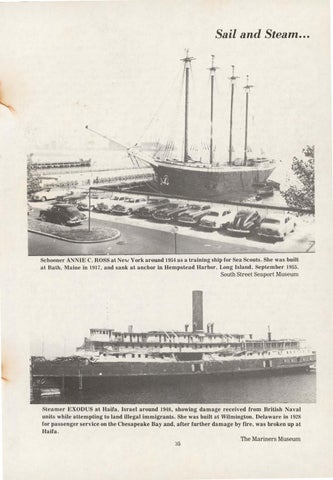 Schooner ANNIE C. ROSS at New York arowid 1954 as a training ship for Sea Scouts. She was built at Bath, Maine in 1917, and sank at anchor in Hempstead Harbor, Long Island, September 1955.

Steamer EXODUS at Haifa, Israel around 1948, showing damage received from British Naval units while attempting to land illegal immigr.ants. She was built at Wilmington, Delaware in 1928 for passenger service on the Chesapeake Bay and, after further damage by fire, was broken up at Haifa. 35