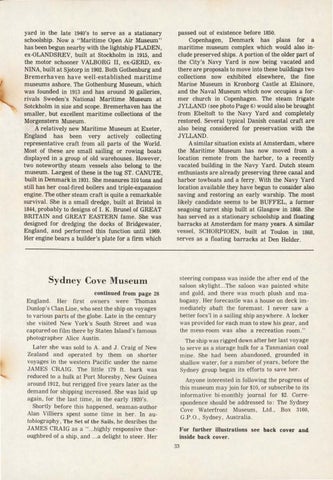 yard in the late 1940&#39;s to serve as a stationary schoolship. Now a &quot;Maritime Open Air Museum&quot; has been begun nearby with the lightship FLADEN, ex-OLANDSREV, built at Stockholm in 1915, and the motor schooner VALBORG II, ex-GERD, exNINA, built at Sjotorp in 1902. Both Gothenburg and Bremerhaven have well-established maritime museums ashore. The Gothenburg Museum, which was founded in 1913 and has around 30 galleries, rivals Sweden&#39;s National Maritime Musewn at Sotckholm in size and scope. Bremerhaven has the smaller, but excellent maritime collections of the Morgenstern Museum. A relatively new Maritime Museum at Exeter, England has been very actively collecting representative craft from all parts of the World. Most of these are small sailing or rowing boats displayed in a group of old warehouses. However, two noteworthy steam vessels also belong to the museum. Largest of these is the tug ST. CANUTE, built in Denmark in 1931. She measures 310 tons and still has her coal-fired boilers and triple-expansion engine. The other steam craft is quite a remarkable survival. She is a small dredge, built at Bristol in 1844, probably to designs of I. K. Brunel of GREAT BRITAIN and GREAT EASTERN fame. She was designed for dredging the docks of Bridgewater, England, and performed this function until 1969. Her engine bears a builder&#39;s plate for a firm which

passed out of existence before 1850. Copenhagen, Denmark has plans for a maritime museum complex which would also include preserved ships. A portion of the older part of the City&#39;s Navy Yard is now being vacated and there are proposals to move into these buildings two collections now exhibited elsewhere, the fine Marine Museum in Kronborg Castle at Elsinore, and the Naval Museum which now occupies a former church in Copenhagen. The steam frigate JYLLAND (see photo Page 6) would also be brought from Ebeltoft to the Navy Yard and completely restored. Several typical Danish coastal craft are also being considered for preservation with the JYLLAND. A similar situation exists at Amsterdam, where the Maritime Museum has now moved from a location remote from the harbor, to a recently vacated building in the Navy Yard. Dutch steam enthusiasts are already preserving three canal and harbor towboats and a ferry. With the Navy Yard location available they have begun to consider also saving and restoring an early warship. The .most likely candidate seems to be BUFFEL, a former seagoing turret ship built at Glasgow in 1868. She has served as a stationary schoolship and floating barracks at Amsterdam for many years. A similar vessel, SCHORPIOEN, built at Toulon in 1868, serves as a floating barracks at Den Helder.

steering compass was inside the after end of the saloon skylight. ..The saloon was painted white and gold , and there was much plush and mahogany. Her forecastle was a house on deck immediately abaft the foremast. I never saw a better foes &#39;! in a sailing ship anywhere. A locker was provided for each man to stow his gear , and the mess-room was also a recreation room. &quot;

Sydney Cove Museum continued from page 28 England. Her first owners were Thomas Dunlop&#39;s Clan Line , who sent the ship on voyages to various parts of the globe. Late in the century she visited New York&#39;s South Street and was captured on film there by Staten Island&#39;s famous photographer Alice Austin. Later she was sold to A. and J . Craig of New Zealand and operated by them on shorter voyages in the western Pacific under the name JAMES CRAIG. The little 179 ft. bark was reduced to a hulk at Port Moresby , New Guinea around 1912, but rerigged five years later as the demand for shipping increased. She was laid up again, for the last time , in the early 1920&#39;s. Shortly before this happened , seaman-author Alan Villiers spent some time in her . In autobiography , The Set of the Sails, he desribes the JAMES CRAIG as a &quot; ... highly responsive thoroughbred of a ship, and ...a delight to steer . Her

The ship was rigged down after her last voyage to serve as a storage hulk for a Tasmanian coal mine. She had been abandoned , grounded in shallow water , for a number of years , before the Sydney group began its efforts to save her. Anyone interested in following the progress of this museum may join for $10, or subscribe to its informative bi-monthly journal for $2. Correspondence should be addressed to: The Sydney Cove Waterfront Museum , Ltd ., Box 3160, G.P.O. , Sydney, Australia. For further illustrations see back cover and inside back cover. 33