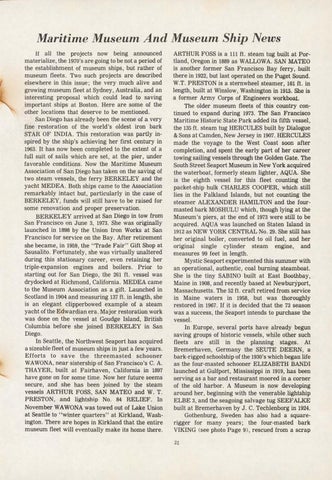 Maritime Museum And Museum Ship News If all the projects now being announced materialize, the 1970&#39;s are going to be not a period of the establishment of museum ships, but rather of museum fleets. Two such projects are described elsewhere in this issue ; the very much alive and growing museum fleet at Sydney, Australia, and an interesting proposal which could lead to saving important ships at Boston. Here are some of the other locations that deserve to be mentioned. San Diego has already been the scene of a very fine restoration of the world&#39;s oldest iron bark STAR OF INDIA. This restoration was partly inspired by the ship&#39;s achieving her first century in 1963. It has now been completed to the extent of a full suit of sails which are set, at the pier, under favorable conditions. Now the Maritime Museum Association of San Diego has taken on the saving of two steam vessels , the ferry BERKELEY and the yacht MEDEA. Both ships came to the Association remarkably intact but, particularly in the case of BERKELEY, funds will still have to be raised for some renovation and proper preservation. BERKELEY arrived at San Diego in tow from San Francisco on June 3, 1973. She was originally launched in 1898 by the Union Iron Works at San Francisco for service on the Bay. After retirement she became, in 1959, the &quot;Trade Fair&quot; Gift Shop at Sausalito. Fortunately, she was virtually unaltered during this stationary career, even retaining her triple-expansion engines and boilers. Prior to starting out for San Diego, the 261 ft. vessel was drydocked at Richmond, California. MEDEA came to the Museum Association as a gift. Launched in Scotland in 1904 and measuring 137 ft. in length, she is an elegant clipperbowed example of a steam yacht of the Edwardian era. Major restoration .work was done on the vessel at Goudge Island, British Columbia before she joined BERKELEY in San Diego. In Seattle , the Northwest Seaport has acquired a sizeable fleet of museum ships in just a few years. Efforts to save the threemasted schooner WAWONA, near sistership of San Francisco&#39;s C. A. THAYER, built at Fairhaven, California in 1897 have gone on for some time. Now her future seems secure, and she has been joined by the steam vessels ARTHUR FOSS, SAN MATEO and W- T. PRESTON, and lightship No . 84 RELIEF. In November WAWONA was towed out of Lake Union at Seattle to &quot;winter quarters&quot; at Kirkland, Washington. There are hopes in Kirkland that the entire museum fleet will eventually make its home there.

ARTHUR FOSS is a 111 ft. steam tug built at Portland, Oregon in 1889 as WALLOWA. SAN MATEO is another former San Francisco Bay ferry, built there in 1922, but last operated on the Puget Sound. W.T. PRESTON is a sternwheel steamer, 161 ft. in length, built at Winslow , Washington in 1915. She is a former Army Corps of Engineers workboat The older museum fleets of this country continued to expand during 1973. The San Francisco Maritime Historic State Park added its fifth vessel, the 135 ft. steam tug HERCULES built by Dialogue &amp; Sons at Camden, New Jersey in 1907. HERCULES made the voyage to the West Coast soon after completion, and spent the early part of her career towing sailing vessels through the Golden Gate. The South Street Seaport Museum in New York acquired the waterboat, formerly steam lighter, AQUA. She is the eighth vessel for this fleet counting the packet-ship hulk CHARLES COOPER, which .still lies in the Falkland Islands, but not cowiting the steamer ALEXANDER HAMIL TON and the fourmasted bark MOSHULU which , though lying at the Museum &#39;s piers, at the end of 1973 were still to be acquired. AQUA was launched on Staten Island in 1912 as NEW YORK CENTRAL No . 29. She still has her original boiler, converted to oil fuel, and her original single cylinder steam engine, and measures 99 feet in length. Mystic Seaport experimented this summer with an operational, authentic, coal burning steamboat. She is the tiny SABINO built at East Boothbay, Maine in 1908, and recently based at Newburyport, Massachusetts. The 52 ft. craft retired from service in Maine waters in 1958, but was thoroughly restored in 1967. If it is decided that the 73 season was a success, the Seaport intends to purchase the vessel. In Europe, several ports have already begun saving groups of historic vessels, while other such fleets are still in the planning stages. At Bremerhaven, Germany the SEUTE DEERN, a bark-rigged schoolship of the 1930&#39;s which began life as the four-masted schooner ELIZABETH BAND! launched at Gulfport, Mississippi in 1919, has been serving as a bar and restaurant moored in a corner of the old harbor . A Museum is now developing around her , beginning with the venerable lightship ELBE 3, and the seagoing salvage tug SEEF ALKE built at Bremerhaven by J.C. Techlenborg in 1924. Gothenburg, Sweden has also had a squarerigger for many years ; the four-masted bark VIKING (see photo Page 9), rescued from a scrap