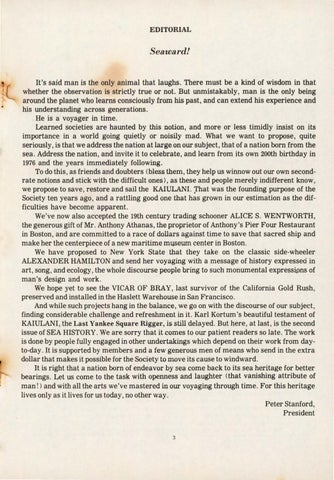 It&#39;s said man is the only animal that laughs. There must be a kind of wisdom in that whether the observation is strictly true or not. But unmistakably, man is the only being around the planet who learns consciously from his past, and can extend his experience and his understanding across generations. He is a voyager in time. Learned societies are haunted by this notion, and more or less timidly insist on its importance in a world going quietly or noisily mad. What we want to propose, quite seriously, is that we address the nation at large on our subject, that of a nation born from the sea. Address the nation, and invite it to celebrate, and learn from its own 2ooth birthday in 1976 and the years immediately following. To do this, as friends and doubters (bless them, they help us winnow out our own secondrate notions and stick with the difficult ones), as these and people merely indifferent know, we propose to save, restore and sail the KAIULANI. &#39;.fhat was the founding purpose of the Society ten years ago, and a rattling good one that has grown in our estimation as the difficulties have become apparent. We&#39;ve now also accepted the 19th century trading schooner ALICE S. WENTWORTH, the generous gift of Mr. Anthony Athanas, the proprietor of Anthony&#39;s Pier Four Restaurant in Boston, and are committed to a race of dollars against time to save that sacred ship and make her the centerpiece of a new maritime mqseum center in Boston. We have proposed to New York State that they take on the classic side-wheeler ALEXANDER HAMILTON and send her voyaging with a message of history expressed in art, song, and ecology, the whole discourse people bring to such monumental expressiJ)ns of man&#39;s design and work. We hope yet to see the VICAR OF BRAY, last survivor of the California Gold Rush, preserved and installed in the Haslett Warehouse in San Francisco. And while such projects hang in the balance, we go on with the discourse of our subject, finding considerable challenge and refreshment in it. Karl Kortum &#39;s beautiful testament of KAIULANI, the Last Yankee Square Rigger, is still delayed. But here, at last, is the second issue of SEA HISTORY. We are sorry that it comes to our patient readers so late. The work is done by people fully engaged in other undertakings which depend on their work from dayto-day. It is supported by members and a few generous men of means who send in the extra dollar that makes it possible for the Society to move its cause to windward. It is right that a nation born of endeavor by sea come back to its sea heritage for better bearings. Let us come to the task with openness and laughter (that vanishing attribute of man!) and with all the arts we&#39;ve mastered in our voyaging through time. For this heritage lives only as it lives for us today, no other way. Peter Stanford, President 3