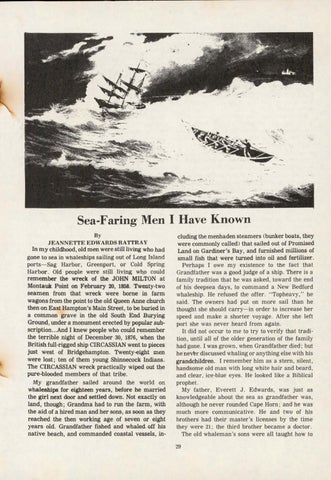 Sea-Faring Men I Have Known By JEANNETTE EDWARDS RATTRAY

In my childhood, old men were still living who had gone to sea in whaleships sailing out of Long Island ports- Sag Harbor, Greenport, or Cold Spring Harbor. Old people were still living wh_o could remember the wreck of the JOHN MILTON at Montauk Point on February 20, 1858. Twenty-two seamen from that wreck were borne in farm wagons from the point to the old Queen Anne church then on East Hampton&#39;s Main Street, to be buried in a common grave in the old South End Burying Ground, under a monument erected by popular subscription ... And I knew people who could remember the terrible night of December 30, 1876, when the British full-rigged ship CIRCASSIAN went to pieces just west of Bridgehampton. Twenty~ight men were lost; ten of them young Shinnecock Indians. The CIRCASSIAN wreck practically wiped out the pure-blooded members of that tribe. My grandfather sailed around the world on. whaleships for eighteen years, before he married the girl next door and settled down. Not exactly on land, though; Grandma had to run the farm, with the aid of a hired man and her sons, as soon as they reached the then working age of seven or eight years old. Grandfather fished and whaled. off his native beach, and commanded coastal vessels, in-

eluding the menhaden steamers (bunker boats, they were commonly called) that sailed out of Promised Land on Gardiner&#39;s Bay, and furnished millions of small fish that were turned into oil and fertilizer. Perhaps I owe my existence to the fact that Grandfather was a good judge of a ship. There is a family tradition that he was asked, toward the end of his deepsea days , to command a New Bedford whaleship. He refused the offer. &quot;Topheavy,&quot; he said . The owners had put on more sail than he thought she should carry-in order to increase her speed and make a shorter voyage . After she left port she was never heard from again. It did not occur to me to try to verify that tradition, until all of the older generation of the family had gone . I was grown , when Grandfather died ; but he Âˇnevl&#39;!r discussed whaling or anything else with his grandchildren. I remember him as a stern , silent, handsome old man with long white hair and beard, and clear, ice-blue eyes. He looked like a Biblical prophet. My father , Everett J . Edwards, was just as knowledgeable about the sea as grandfather was , although he never rounded Cape Horn ; and he was much more communicative. He and two of his brothers had their master&#39;s licenses by the time they were 21 ; the third brother became a doctor . The old whaleman &#39;s sons were all taught how to 29