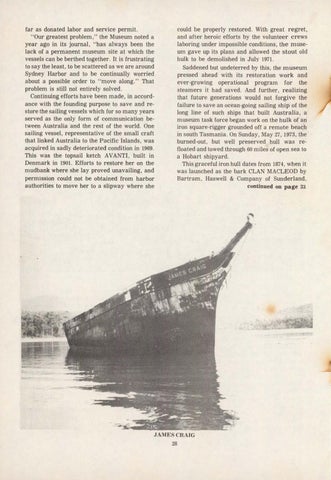 far as donated labor and service permit. &quot;Our greatest problem,&quot; the Museum noted a year ago in its journal, &quot;has always been the lack of a permanent museum site at which the vessels can be berthed together . It is frustrating to say the least, to be scattered as we are around Sydney Harbor and to be continually worried about a possible order to &quot;move along.&quot; That problem is still not entirely solved. Continuing efforts have been made, in accordance with the founding purpose to save and restore the sailing vessels which for so many years served as the only form of communication between Australia and the rest of the world. One sailing vessel, representative of the small craft that linked Australia to the Pacific Islands, was acquired in sadly deteriorated condition in 1969. This was the topsail ketch AVANT! , built in Denmark in 1901. Efforts to restore her on the mudbank where she lay proved unavailing , and permission could not be obtained from harbor authorities to move her to a slipway where she

could be properly restored . With great regret, and after heroic efforts by the volunteer crews laboring under impossible conditions, the museum gave up its plans and allowed the stout old hulk to be demolished in July 1971. Saddened but undeterred by this, the museum pressed ahead with its restoration work and ever-growing operational program for the steamers it had saved. And further, realizing that future generations would not forgive the failure to save an ocean-going sailing ship of the long line of such ships that built Australia, a museum task force began work on the hulk of an iron square-rigger grounded off a remote beach in south Tasmania. On Sunday, May 27, 1973, the burned-out, but well preserved hull was refloated and towed through 60 miles of open sea to a Hobart shipyard. This graceful iron hull dates from 1874, when it was launched as the bark CLAN MACLEOD by Bartram , Haswell &amp; Company of Sunderland. continued on page 33