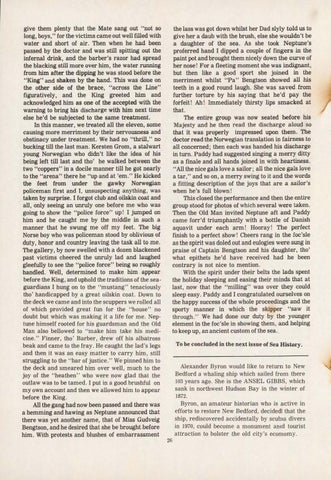 give them plenty that the Mate sang out &quot;not so long, boys,&quot; for the victims came out well filled with water and short of air. Then when he had been passed by the doctor and was still spitting out the infernal drink, and the barber&#39;s razor had spread the blacking still more over him, the water running from him after the dipping he was stood before the &quot;King&quot; and shaken by the hand. This was done on the other side of the brace, &quot;across the Line&quot; figuratively, and the King greeted him and acknowledged him as one of the accepted with the warning to bring his discharge with him next time else he&#39;d be subjected to the same treatment. In this manner, we treated all the eleven, some causing -more merriment by their nervousness and obstinacy under treatment. We had no &quot;thrill,&quot; no bucking till the last man. Kersten Grom, a stalwart young Norwegian who didn&#39;t like the idea of his being left till last and tho&#39; he walked between the two &quot;coppers&quot; in a docile manner till he got nearly to the &quot;arena&quot; there he &quot;up and at &#39;em.&quot; He kicked the feet from under the gawky Norwegian policeman first and I, unsuspecting anything, was taken by surprise. I forgot club and oilskin coat and all, only seeing an unruly one before me who was going to show the &quot;police force&quot; up! I jumped on him and he caught me by the middle in such a manner that he swung me off my feet. The big Norse boy who was policeman stood by oblivious of duty, honor and country leaving the task all to me. The gallery, by now swelled with a dozen blackened past victims cheered the unruly lad and laughed gleefully to see the &quot;police force&quot; being so roughly handled. Well, determined to make him appear before the King, and uphold the traditions of the seaguardians I hung on to the &quot;mustang&quot; tenaciously tho&#39; handicapped by a great oilskin coat. Down to the deck we came and into the scuppers we rolled all of which provided great fun for the &quot;house&quot; no doubt but which was making it a life for me. Neptune himself rooted for his guardsman and the Old Man also bellowed to &quot;make him take his medicine.&quot; Finner, tho&#39; Barber, drew off his albatross beak and came to the fray. He caught the lad&#39;s legs and then it was an easy matter to carry him, still struggling to the &quot;bar of justice.&quot; We pinned him to the deck and smeared him over well, much to the joy of the &quot;heathen&quot; who were now glad that the outlaw was to be tamed. I put in a good brushful on my own account and then we allowed him to appear before the King . All the gang had now been passed and there was a hemming and hawing as Neptune announced that there was yet another name, that of Miss Gudveig Bengtson, and he desired that she be brought.before him . With protests and blushes of embarrassment

the lass was got down whilst her Dad slyly told us to give her a daub with the brush, else she wouldn&#39;t be a daughter of the sea. As she took Neptune&#39;s proferred hand I dipped a couple of fingers in the paint pot and brought them nicely down the ~urve of her nose! For a fleeting moment she was indignant, but then like a good sport she joined in the merriment whilst &quot;Pa&quot; Bengtson showed all his teeth in a good round laugh. She was saved from further torture by his saying that he&#39;d pay the forfeit! Ah! Immediately thirsty lips smacked at that. The entire group was now seated before his Majesty and he then read the discharge aloud so that it was properly impressed upon them. The doctor read the Norwegian translation in fairness to all concerned; then each was handed his discharge in turn. Paddy had suggested singing a merry ditty as a finale and all hands joined in with heartiness. &#39;&#39;All the nice gals love a sailor; all the nice gals love a tar,&quot; and so on, a merry swing to it and the words a fitting description of the joys that are a sailor&#39;s when he&#39;s full blown! This closed the performance and then the entire group stood for photos of which several were taken. Then the Old Man invited Neptune aft and Paddy came forr&#39;d triumphantly with a bottle of Danish aquavit under each arm! Hooray! The perfect finish to a perfect show! Cheers rang in the foc&#39;sle as the spirit was doled out and eulogies were.sung in praise of Captain Bengtson and his daughter, tho&#39; what epithets he&#39;d have received had he been contrary is not nice to mention. With the spirit under their belts the lads spent the holiday sleeping and easing their minds that at last, now that the &quot;milling&quot; was over they could sleep easy. Paddy and I congratulated ourselves on the happy success of the whole proceedings and the sporty manner in which the skipper &#39;&#39;saw it through.&quot; We had done our duty by the younger element in the foc&#39;sle in showing them, and helping to keep up, an ancient custom of the sea .. To be concluded in the next issue of Sea History.

Alexander Byron would like to return to New Bedford a whaling ship which sailed from there 103 years ago . She is the ANSEL GIBBS , which sank in northwest Hudson Bay in the winter of 1872.

Byron, an amateur historian who is active in efforts to restore New Bedford, decided! that the ship, rediscovered accidentally by scub)a divers in 1970, could become a monument ancd tourist attraction to bolster the old city&#39;s ecomomy. 26