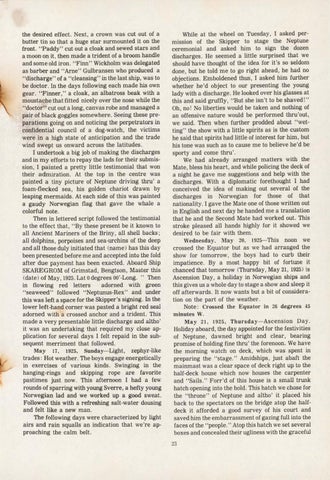 the desired effect. Next, a crown was cut out of a butter tin so that a huge star surmounted it on the front. &quot;Paddy&quot; cut out a cloak and sewed stars and a moon on it, then made a trident of a broom handle and some old iron. &quot;Finn&quot; Wickholm was delegated as barber and &quot;Arne&quot; Gulbransen who produced a &quot;discharge&quot; of a &quot;cleansing&quot; in the last ship, was to be doctor. In the days following each made his own gear. &quot;Finner,&quot; a cloak, an albatross beak with a moustache that fitted nicely over the nose while the &#39;&#39;doctor&#39;&#39; cutout a long, canvas robe and managed a pair of black goggles somewhere. Seeing these preparations going on and noticing the perpetrators in confidential council of a dog-watch, the victims were in a high state of anticipation and the trade wind swept us onward across the latitudes. I undertook a big job of making the discharges and in my efforts to repay the lads for their submission, I painted a pretty little testimonial that won their admiration. At the top in the centre was painted a tiny picture of Neptune driving thru&#39; a foam-flecked sea, his golden chariot drawn by leaping mermaids. At each side of this was painted a gaudy Norwegian flag that gave the whale a colorful note. Then in lettered script followed the testimonial to the effect that, &quot;By these present be it known to all Ancient Mariners of the Briny, all shell backs; all dolphins, porpoises and sea-urchins of the deep and all those duly initiated that (name) has this day been presented before me and accepted into the fold after due payment has been exacted. Aboard Ship SKAREGROM of Grimstad, Bengtson, Master this (date) of May, 1925. Lat 0 degrees 00&#39;-Long. &quot; Then in flowing red letters adorned with green &quot;seaweed&quot; followed &quot;Neptunus-Rex&quot; and under this was left a space for the Skipper&#39;s signing. In the lower left-hand corner was pasted a bright red seal adorned with a crossed anchor and a trident. This made a very presentable little discharge and altho&#39; it was an undertaking that required my close application for several days I felt repaid in the subsequent merriment that followed. May 17, 1925, Sunday-Light, zephyr-like trades : Hot weather. The boys engage energetically in exercises of various kinds. Swinging in the hanging-rings and skipping rope are favorite pastimes just now. This afternoon I had a few rounds of sparring with young Sverre, a hefty young Norwegian lad and we worked up a good sweat. Followed this with a refreshing salt-water dousing and felt like a new man. The following days were characterized by light airs and rain squalls an indication that we&#39;re approaching the calm belt.

While at the wheel on Tuesday, I asked permission of the Skipper to stage the Neptune ceremonial and asked him to sign the dozen discharges. He seemed a little surprised that we should have thought of the idea for it&#39;s so seldom done, but he told me to go right ahead, he had no objections. Emboldened thus, I asked him further whether he&#39;d object to our presenting the young lady with a discharge. He looked over his glasses at this and said gruffly, &quot;But she isn&#39;t to be shaved!&quot; Oh, no! No liberties would be taken and nothing of an offensive nature would be performed thru&#39;out, we said. Then when further prodded about .&quot;wetting&quot; the show with a little spirits as is the custom he said that spirits had little of interest for him, but his tone was such as to cause me to believe he&#39;d be sporty and come thru&#39;. We had already arranged matters with the Mate, bless his heart, and while policing the deck of a night he gave me suggestions and help with the discharges. With a diplomatic forethought I had conceived the idea of making out several of the discharges in Norwegian for those of that nationality. I gave the Mate one of those written out in English and next day he handed me a translation that he and the Second Mate had worked out. This stroke pleased all hands highly for it showed we desired to be fair with them . Wednesday, May 20, 1925-This noon we crossed the Equator but as we &#39;had arranged the show for tomorrow, the boys had to curb their impatience. By a most happy bit of fortune it chanced that tomorrow (Thursday, May 21, 1925) is Ascension Day, a holiday in Norwegian ships and this gives us a whole day to stage a show and sleep it off afterwards. It now wants but a bit of consideration on the part of the weather . Note: Crossed the Equator in 26 degrees 45 minutes W. May 21, 1925, Thursday-Ascension Day. Holiday aboard, the day appointed for the festivities of Neptune, dawned bright and clear, bearing promise of holding fine thru&#39; the forenoon. We have the morning watch on deck, which was spent in preparing the &quot;stage.&quot; Amidships, just abaft the mainmast was a clear space of deck right up to the half-deck house which now houses the carpenter and &quot;Sails.&quot; Forr&#39;d of this house is a small trunk hatch opening into the hold. This hatch we chose for the &quot;throne&quot; of Neptune and altho&#39; it placed his back to the spectators on the bridge atop the halfdeck it afforded a good survey of his court and saved him the embarrassment of gazing fullinto the faces of the &quot;people.&quot; Atop this hatch we set several boxes and concealed their ugliness with the graceful 23