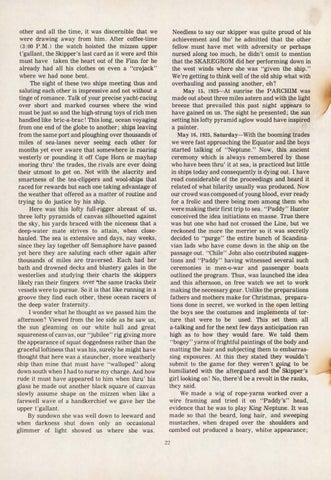 other and all the time, it was discernible that we were drawing away from him. After coffee-time (3:00 P.M. ) the watch hoisted the mizzen .upper t&#39;gallant, the Skipper&#39;s last card as it were and this must have taken the heart out of the Finn for he already had all his clothes on even a &quot;crojack&quot; where we had none bent. The sight of these two ships meeting thus and saluting each other is impressive and not without a tinge of romance. Talk of your precise yacht-racing over short and marked courses where the wind must be just so and the high-strung toys of rich men handled like bric-a-brac! This long, ocean voyaging from one end of the globe to another; ships leaving from the same port and ploughing over thousands of miles of sea-lanes never seeing each other for months yet ever aware that somewhere in roaring westerly or pounding it off Cape Horn or mayhap snoring thru &#39; the trades, the rivals are ever doing their utmost to get on. Not with the alacrity and smartness of the tea-clippers and wool-ships that raced for rewards but each one taking advantage of the weather that offered as a matter of routine and trying to do justice by his ship. Here was this lofty full-rigger abreast of us, three lofty pyramids of canvas silhouetted against the sky , his yards braced with the niceness that a deep-water mate strives to attain, when closehauled. The sea is extensive and days, nay weeks, since they lay together off Semaphore have passed yet here they are saluting each other again after thousands of miles are traversed. Each had her bath and drowned decks and blustery gales in the westerlies and studying their charts the skippers likely ran their fingers over &quot;the same tracks their vessels were to pursue. So it is that like runningin a groove they find each other , these ocean racers of the deep water fraternity . I wonder what he thought as we passed him the afternoon ? Viewed from the lee side as he saw us , the sun gleaming on our white hull and great squareness of canvas, our &quot;jubilee&quot; rig giving more the appearance of squat doggedness rather than the graceful loftiness that was his, surely he might have thought that here was a stauncher, more weatherly ship than mine that must have &quot;walloped&quot; along down south when I had to nurse my charge. And how rude it must have appeared to him when thru &#39; his glass he made out another black square of canvas slowly assume shape on the mizzen when like a farewell wave of a handkerchief we gave her the upper t&#39;gallant. By sundown she was well down to leeward and when darkness shut down only an occasional glimmer of light showed us where she was.

Needless to say our skipper was quite proud of his achievement and tho&#39; he admitted that the other fellow must have met with adversity or perhaps nursed along too much, he didn&#39;t omit to mention that the SKAREGROM did her performing down in the west winds where she was &quot;given the ship.&quot; We&#39;re getting to think well of the old ship what with overhauling and passing another, eh? May 15, 1925-At sunrise the PARCHIM was made out about three miles astern and with the light breeze that prevailed this past night appears to have gained on us. The sight he presented; the sun setting his lofty pyramid aglow would have inspired a painter. May 16, 1925, Saturday-With the booming trades we were fast approaching the Equator and the boys started talking of &quot;Neptune. &quot; Now, this ancient ceremony which is always remembered by those who have been thru &#39; it at sea, is practiced but little in ships today and consequently is dying out. I have read considerable of the proceedings and heard it related of what hilarity usually was produced. Now our crowd was composed of young blood, ever ready for a frolic and there being men among them who were making their first trip to sea . &quot;Paddy&quot; Hunter conceived the idea initiations en masse. True there was but one who had not crossed the Line, but we reckoned the more the merrier so it was secretly decided to &quot;purge&quot; the entire bunch of ScandinaÂˇ vian lads who have come down in the ship on the passage out. &quot;Chile&quot; John also contributed suggestions and &quot;Paddy &quot; having witnessed several such ceremonies in men-o-war and passenger boats outlined the program. Thus , was launched the idea and this afternoon, on free watch we set to work making the necessary gear. Unlike the preparations fathers and mothers make for Christmas, preparations done in secret, we worked in the open letting the boys see the costumes and implements of torture that were to be used. This set them all a-talking and for the next few days anticipation ran high as to how they would fare. We told them &quot;bogey &quot; yarns of frightful paintings of the body and matting the hair and subjecting them to embarrassing exposures . At this they stated they wouldn&#39;t submit to the game for they weren&#39;t g~ing to be humiliated with the afterguard and the Skipper&#39;s girl looking on! No , there&#39;d be a revolt in the ranks, they said. We made a wig of rope-yarns worked over a wire framing and tried it on &quot;Paddy&#39;s&quot; head, evidence that he was to play King Nfeptune. It was made so that the beard, long hair, and sweeping mustaches, when draped over the shoulders and c.ombed out produced a hoary, whitce appearance ; 22