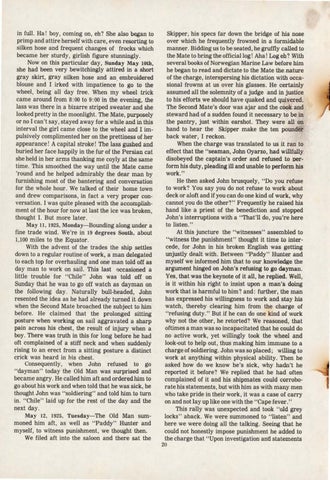 in full. Ha! boy, coming on, eh? She also began to primp and attire herself with care, even resorting to silken hose and frequent changes of frocks which became her sturdy, girlish figure stunningly. Now on this particular day, Sunday May 10th, she had been very bewitchingly attired in a short gray skirt, gray silken hose and an embroidered blouse and I irked with impatience . to go to the wheel, being all day free . When my wheel trick came around from 8:00 to 9 :00 in the evening, the lass was there in a bizarre striped sweater and she looked pretty in the moonlight. The Mate, purposely or no I can&#39;t say, stayed away for a while and in this interval the girl came close to the wheel and I impulsively complimented her on the prettiness of .her appearance ! A capital stroke! The lass gushed and buried her face happily in the fur of the Persian cat she held in her arms thanking me coyly at the same time . This smoothed the way until the Mate came &#39;round and he helped admirably the dear man by furnishing most of the bantering and conversation for the whole hour. We talked of their home .town and drew comparisons, in fact a very proper conversation. I was quite pleased with the accomplishment of the hour for now at last the ice was. broken, thought I. But more later. May 11, 1925, Monday-Bounding along under a fine trade wind. We&#39;re in 19 degrees South, about 1,100 miles to the Equator. With the advent of the trades the ship settles down to a regular routine of work, a man delegated to each top for overhauling and one man told off as day man to work on sail. This last occasioned a little trouble for &quot;Chile&quot; John was told off on Sunday that he was to go off watch as dayman on the following day . Naturally bull-headed, John resented the idea as he had already turned it down when the Second Mate broached the subject to him before. He claimed that the prolonged sitting posture when working on sail aggravated a sharp pain across his chest, the result of injury when a boy. There was truth in this for long before he had oft complained of a stiff neck and when suddenly rising to an erect from a sitting posture a distinct crick was heard in his chest. Consequently, when John refused to go &quot;dayman&quot; today the Old Man was surprised and became angry. He called him aft and ordered.him to go about his work and when told that he was sick, he thought John was &quot;soldiering&quot; and told him.to turn in. &quot;Chile&quot; laid up for the rest of the day and the next day . May 12, 1925, Tuesday-The Old Man summoned him aft , as well as &quot;Paddy&quot; Hunter and myself, to witness punishment, we thought then. We filed aft into the saloon and there sat the

Skipper, his specs far down the bridg~ of his nose over which he frequently frowned in a formidable manner. Bidding us to be seated, he gruffly called to the Mate to bring the official log! Aha ! Log eh? With several books of Norwegian Marine Law before him he began to read and dictate to the Mate the .nature of the charge, interspersing his dictation with occasional frowns at us over his glasses. He certainly assumed all the solemnity of a judge and in justice to his efforts we should have quaked and quivered. The Second Mate&#39;s door was ajar and the cook and steward had of a sudden found it necessary to be in the pantry, just within earshot. They were all on hand to hear the Skipper make the ten pounder back water, I reckon. When the charge was translated to us it r.an to effect that the &quot;seaman, John Oyarzo, had willfully disobeyed the captain&#39;s order and refused to perform his duty, pleading ill and unable to perform his work. &quot; He then asked John brusquely, &quot;Do you refuse to work? You say you do not refuse to work about deck or aloft and if you can do one kind of work, why cannot you do the other? &quot; Frequently he raised his hand like a priest of the benediction and stopped John&#39;s interruptions with a &quot;That&#39;ll do, you&#39;re here to listen.&quot; At this juncture the &quot;witnesses&quot; assembled to &quot;witness the punishment&quot; thought it time to intercede, for John in his broken English was getting unjustly dealt with . Between &quot;Paddy&quot; Hunter and myself we informed him that to our knowledge the argument hinged on John&#39;s refusing to go &lt;layman. Yes, that was the keynote of it all, he replied. Well, is it within his right to insist upon a man&#39;s. doing work that is harmful to him? and : further, the man has expressed his willingness to work and stay his watch, thereby clearing him from the charge of &quot;refusing duty.&quot; But if he can do one kind of work why not the other, he retorted? We reasoned, that oftimes a man was so incapacitated that he could do no active work , yet willingly took the wheel .and look-out to help out, thus making him immune to a charge of soldiering. John was so placed; willing to work at anything within physical ability. Then he asked how do we know he&#39;s sick, why hadn&#39;t he reported it before? We replied that he had often complained of it and his shipmates could corroborate his statements, but with him as with many men who take pride in their work, it was a case of carry on and not lay up like one with the &quot;Cape fever.&quot; This rally was unexpected and took &quot;old grey locks&quot; aback . We were summoned to &quot;listen&quot; and here we were doing all the talking . Seeing that he could not honestly impose punishment he added to the charge that &quot;Upon investigation anti statements 20