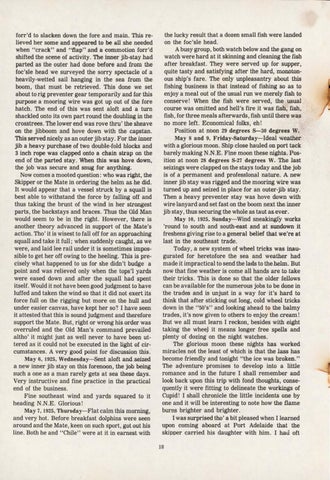 forr &#39;d to slacken down the fore and main. This relieved her some and appeared to be all she needed when &quot;crack&quot; and &quot;flap&quot; and a commotion forr&#39;d shifted the scene of activity. The inner jib-stay had parted as the outer had done before and from the foc&#39;sle head we surveyed the sorry spectacle of .a heavily-wetted sail hanging in the sea from the boom, that must be retrieved. This done we set about to rig preventer gear temporarily and for this purpose a mooring wire was got up out of the fore hatch. The end of this was sent aloft and a turn shackled onto its own part round the doubling in the crosstrees. The lower end was rove thru&#39; the sheave on the jibboom and hove down with the .capstan. This served nicely as an outer jib stay. For the.inner jib a heavy purchase of two double-fold blocks and 3 inch rope was clapped onto a chain strap on the end of the parted stay. When this was hove down, the job was secure and snug for anything. Now comes a mooted question: who was right, the Skipper or the Mate in ordering the helm as he did. It would appear that a vessel struck by a squall is best able to withstand the force by falling off and thus taking the brunt of the wind in her strongest parts, the backstays and braces. Thus the Old Man would seem to be in the right. However, there is another theory advanced in support of the Mate&#39;s action. Tho&#39; it is wisest to fall off for an approaching squall and take it full ; when suddenly caught, as we were, and laid lee rail under it is sometimes impossible to get her off owing to the heeling. This is precisely what happened to us for she didn&#39;t budge a point and was relieved only when the tops&#39;l yards were eased down and after the squall had spent itself. Would it not have been good judgment to have luffed and taken the wind so that it did not exert its force full on the rigging but more on the hull and under easier canvas, have kept her so? I have seen it attested that this is sound judgment and therefore support the Mate. But, right or wrong his order was overruled and the Old Man&#39;s command prevailed altho&#39; it might just as well never to have been uttered as it could not be executed in the light of circumstances. A very good point for discussion this. May 6, 1925, Wednesday-Sent aloft and .seized a new inner jib stay on this forenoon, the job being such a one as a man rarely gets at sea these days. Very instructive and fine practice in the. practical end of the business. Fine southeast wind and yards squared to it heading N.N.E. Glorious! May 7, 1925, Thursday-Flat calm this morning, and very hot. Before breakfast dolphins were seen around and the Mate, keen on such sport, got .out his line. Both he and &quot;Chile&quot; were at it in earnest with

the lucky result that a dozen small fish were landed on the foc &#39;sle head. A busy group, both watch below and the gang on watch were hard at it skinning and cleaning the fish after breakfast. They were served up for supper, quite tasty and satisfying after the hard, monotonous ship&#39;s fare . The only unpleasantry about this fishing business is that instead of fishing so as to enjoy a meal out of the usual run we merely fish to conserve! When the fish were served, the usual course was omitted and hell&#39;s fire it was fish, fish, fish , for three meals afterwards, fish until there was no more left. Economical folks, eh! Position at nt:&gt;on 29 degrees S-30 degrees W. May 8 and 9, Friday-Saturday-Ideal weather with a glorious moon. Ship close hauled on port tack barely making N.N.E . Fine moon these nights. Position at noon 28 degrees S-27 degrees W. The last seizings were clapped on the stays today and.the job is of a permanent and professional nature. A new inner jib stay was rigged and the mooring wire was turned up and seized in place for an outer-jib stay. Then a heavy preventer stay was hove down with wire lanyard and set fast on the boom next the inner jib stay, thus securing the whole as taut as ever. May 10, 1925, Sunday-Wind sneakingly works &#39;round to south and south-east and at sundown it freshens giving rise to a general belief that we&#39;re at last in the southeast trade. Today, a new system of wheel tricks was inaugurated for heretofore the sea and weather had made it impractical to send the lads to the.helm. But now that fine weather is come all hands are to .take their tricks. This is done so that the older fellows can be available for the numerous jobs to be done in the trades and is unjust in a way for it&#39;s hard to think that after sticking out long, cold wheel tricks down in the &quot;50&#39;s&quot; and looking ahead to the balmy trades , it&#39;s now given to others to enjoy the cream! But we all must learn I reckon, besides with eight taking the wheeJ it means longer free spells and plenty of dozing on the night watches. The glorious moon these nights has worked miracles not the least of which is that the lass has become friendly and tonight &quot;the ice was broken.&quot; The adventure promises to develop into a little romance and in the future I shall remember and look back upon this trip with fond thoughts, consequently it were fitting to delineate the workings of Cupid! I shall chronicle the little incidents one by one and it will be interesting to note how the flame burns brighter and brighter. I was surprised tho&#39; a bit pleased when I learned upon coming aboard at Port Adelaide that the skipper carried his daughter with him. I had oft 18