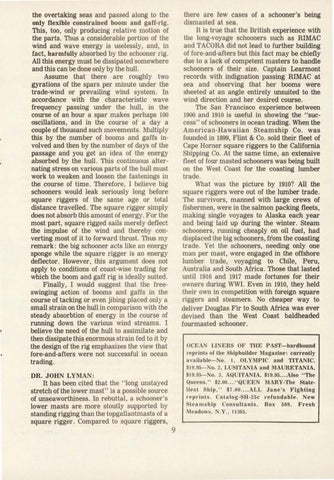 there are few cases of a schooner&#39;s being dismasted at sea. It is true that the British experience with the long-voyage schooners such as RIMAC and TACORA did not lead to further building of fore-and-afters but this fact may be chiefly due to a lack of competent masters to handle schooners of their size. Captain Learmont records with indignation passing RIMAC at sea and observing that her booms were sheeted at an angle entirely unsuited to the wind direction and her desired course. The San Francisco experience between 1900 and 1910 is useful in showing the &quot;success&quot; of schooners in ocean trading. When the American-Hawaiian Steamship Co. was founded in 1899, Flint &amp; Co. sold their fleet of Cape Horner square riggers to the California Shipping Co. At the same time, an extensive fleet of four masted schooners was being built on the West Coast for the coasting lumber trade. What was the picture by 1910? All the square riggers were out of the lumber trade. The survivors, manned with large crews of fishermen, were in the salmon packing fleets, making single voyages to Alaska each year and being laid up during the winter. Steam schooners, running cheaply on oil fuel, had displaced the big schooners, from the coasting trade. Yet the schooners, needing only one man per mast, were engaged in the offshore lumber trade, voyaging to Chile, Peru, Australia and South Africa. Those that lasted until 1916 and 1917 made fortunes for their owners during WWI. Even in 1910, they held their own in competition with foreign square riggers and steamers. No cheaper way to deliver Douglas Fir to South Africa was ever devised than the West Coast baldheaded fourmasted schooner.

the overtaking seas and passed along to the only flexible constrained boom and gaff-rig. This, too, only producing relative motion of the parts. Thus a considerable portion of the wind and wave energy is uselessly, and, in fact, harmfully absorbed by the schooner rig. All this energy must be dissipated somewhere and this can be done only by the hull. Assume that there are roughly two gyrations of the spars per minute under the trade-wind or prevailing wind system. In accordance with the characteristic wave frequency passing under the hull, in the course of an hour a spar makes perhaps 100 oscillations, and in the course of a day a couple of thousand such movements. Multiply this by the number of booms and gaffs involved and then by the number of days of the passage and you get an idea of the energy absorbed by the hull. This continuous alternating stress on various parts of the hull must work to weaken and loosen the fastenings in the course of time. Therefore, I believe big schooners would leak seriously long before square riggers of the same age or total distance travelled. The square rigger simply does not absorb this amount of energy. For the most part, square rigged sails merely deflect the impulse of the wind and thereby converting most of it to forward thrust. Thus my remark: the big schooner acts like an energy sponge while the square rigger is an energy deflector. However, this argument does not apply to conditions of coast-wise trading for which the boom and gaff rig is ideally suited. Finally, I would suggest that the freeswinging action of booms and gaffs in the course of tacking or even jibing placed only a small strain on the hull in comparison with the steady absorbtion of energy in the course of running down the various wind streams. I believe the need of the hull to assimilate and then dissipate this enormous strain fed to it by the design of the rig emphasizes the view that fore-and-afters were not successful in ocean trading.

DR. JOHN LYMAN: It has been cited that the &quot;long unstayed

stretch of the lower mast&quot; is a possible source of unseaworthiness. In rebuttal, a schooner&#39;s lower masts are more stoutly supported by standing rigging than the topgallantmasts of a square rigger. Compared to square riggers,