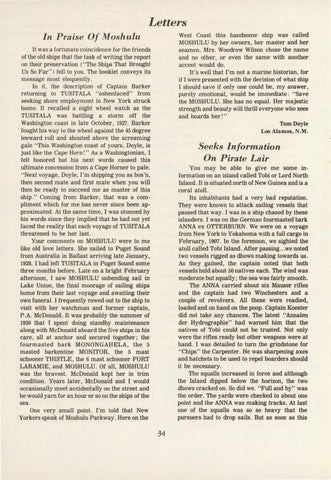 Letters West Coast this handsome ship was called MOSHULU by her owners, her master and her seamen. Mrs. Woodrow Wilson chose the name and no other, or even the same with another accent would do . It&#39;s well that I&#39;m not a marine historian, for if I were presented with the decision of what ship I should save if only one could be, my answer, purely emotional, would be immediate: &quot;Save the MOSHULU. She has no equal. Her majestic strength and beauty will thrill everyone who sees and boards her ! &quot;

In Praise Of Moshulu It was a fortunate coincidence for the friends of the old ships that the task of writing the report on their preservation (&quot;The Shivs That Brought Us So Far&quot;) fell to you. The booklet conveys its message most eloquently. In it, the description of Captain Barker returning to TUSITALA &quot;ashenfaced&quot; from seeking shore employment in New York struck home. It recalled a night wheel watch as the TUSITALA was battling a storm off the Washington coast in late October, 1927. Barker fought his way to the wheel against the 45 degree leeward roll and shouted above the screaming gale &quot;This Washington coast of yours, Doyle, is just like the Cape Hom! &quot; As a Washingtonian, I felt honored but his next words caused this ultimate concession from a Cape Horner to pale. &quot; Next voyage, Doyle, I&#39;m shipping you as bos&#39;n, then second mate and first mate when you will then be ready to succeed me as master of this ship.&quot; Coming from Barker, that was a compliment which for me has never since been approximated. At the same time, I was stunned by his words since they implied that he had not yet faced the reality that each voyage of TUSIT ALA threatened to be her last. Your comments on MOSHULU were to me like old love letters. She sailed to Puget Sound from Australia in Ballast arriving late January, 1928. I had left TUSITALA in Puget Sound some three months before. Late on a bright February afternoon, I saw MOSHULU unbending sail in Lake Union, the final moorage of sailing ships home from their last voyage and awaiting their own funeral. I frequently rowed out to the ship to visit with her watchman and former captain, P.A. McDonald. It was probably the summer of 1930 that I spent doing standby maintenance along with McDonald aboard the five ships in his care, all at anchor and secured together; the fourmasted bark MONONGAHELA, the 5 masted barkentine MONITOR, the 5 mast schooner THISTLE, the 6 mast schooner FORT LARAMIE, and MOSHULU. Of all, MOSHULU was the bravest. McDonald kept her in trim condition . Years later, McDonald and I would occasionally meet accidentally on the street and he would yarn for an hour or so on the ships of the sea. One very small point. I&#39;m told that New Yorkers speak of Moshulu Parkway. Here on the

Seeks Information On Pirate Lair You may be able to give me some information on an island called Tobi or Lord North Island. It is situated north of New Guinea and is a coral atoll. Its inhabitants had a very bad reputation. They were known to attack sailing vessels that passed that way. I was in a ship chased by these islanders. I was on the German fourmasted bark ANNA ex OTTERBURN. We were on a voyage from New York to Yokahoma with a full cargo in February, 1907. In the forenoon, we sighted the atoll called Tobi Island. After passing ...we noted two vessels rigged as dhows making towards us. As they gained, the captain noted that both vessels held about 50 natives each. The wind was moderate but squally; the sea was fairly smooth. The ANNA carried about six Mauser rifles and the captain had two Winchesters and a couple of revolvers. All these Âˇ were readied, loaded and on hand on the poop. Captain Koester did not take any chances. The latest &quot;Annalen der Hydrographie&quot; had warned him that the natives of Tobi could not be trusted. Not only were the rifles ready but other weapons were at hand. I was detailed to turn the grindstone for &quot;Chips&quot; the Carpenter. He was sharpening axes and hatchets to be used to repel boarders should it be necessary. The squalls increased in force and although the Island dipped below the horizon, the two dhows cracked on. So did we. &quot;Full and by&quot; was the order. The yards were checked in about one point and the ANNA was making tracks. At last one of the squalls was so so heavy that the pursuers had to drop sails. But as soon as this