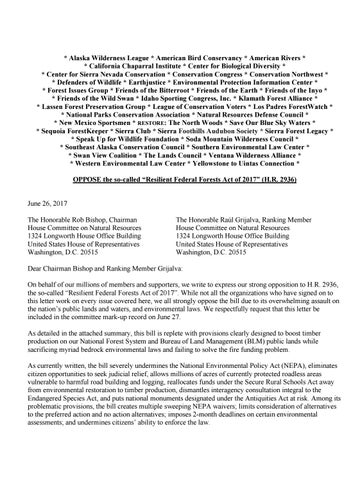 Dear Chairman Bishop and Ranking Member Grijalva: On behalf of our millions of members and supporters, we write to express our strong opposition to H.R. 2936, the so-called “Resilient Federal Forests Act of 2017”. While not all the organizations who have signed on to this letter work on every issue covered here, we all strongly oppose the bill due to its overwhelming assault on the nation’s public lands and waters, and environmental laws. We respectfully request that this letter be included in the committee mark-up record on June 27. As detailed in the attached summary, this bill is replete with provisions clearly designed to boost timber production on our National Forest System and Bureau of Land Management (BLM) public lands while sacrificing myriad bedrock environmental laws and failing to solve the fire funding problem. As currently written, the bill severely undermines the National Environmental Policy Act (NEPA), eliminates citizen opportunities to seek judicial relief, allows millions of acres of currently protected roadless areas vulnerable to harmful road building and logging, reallocates funds under the Secure Rural Schools Act away from environmental restoration to timber production, dismantles interagency consultation integral to the Endangered Species Act, and puts national monuments designated under the Antiquities Act at risk. Among its problematic provisions, the bill creates multiple sweeping NEPA waivers; limits consideration of alternatives to the preferred action and no action alternatives; imposes 2-month deadlines on certain environmental assessments; and undermines citizens’ ability to enforce the law.

Along with the following reasons, we strongly urge you to oppose this bill: Casts Aside NEPA Requirements for Public Engagement and Environmental Review: NEPA is a bedrock law that ensures the public is engaged in the development of programs and projects affecting the environment and that supports sound environmental decisions by diligently evaluating a range of program and project alternatives. H.R. 2936 cuts out meaningful public involvement and enables significant degradation of public lands and waters by waiving NEPA for a broad range of harmful activities that are “categorically excluded” from substantive environmental review. Under the bill, forest clearing could occur on areas up to 30,000 acres, including for the purposes of timber production, without substantive environmental review or public engagement. The potential damage here cannot be overstated: this would allow a categorical exclusion up to nearly 429 times larger than the current 70-acre categorical exclusion for national forest logging projects. The bill goes even further by limiting the application of the “extraordinary circumstances” procedures under NEPA, thus allowing the Forest Service to use abbreviated environmental reviews without considering whether the project is within a potential wilderness area, has a cumulative impact on the environment; may affect endangered species, among other vital considerations. The bill also attacks informed public engagement and environmental protection by limiting the number of alternatives subject to environmental review in some cases to only the agency’s proposed action and taking no action, drastically limiting the NEPA review timeframe in some cases to only 2 months, and exempting forest planning from NEPA compliance. Limits the Fundamental American Principle of Citizen Access to Courts: H.R. 2936 requires the Forest Service and BLM to establish a binding arbitration process for a broad range of projects; the Forest Service alone would be authorized to designate up to 90 projects a year under the program. The provision would waive judicial review of the projects, even when the government clearly failed to follow the law. The bill takes this even further by eliminating citizens’ rights under the Equal Access to Justice Act to recover attorneys’ fees from the federal government when they prevail in court. Attacks the Endangered Species Act: H.R. 2936 is a brazen attack on the Endangered Species Act (ESA), specifically singling out Section 7 consultation checks and balances processes designed to avoid jeopardizing listed species and destroying their habitat. The bill allows the Forest Service and BLM to unilaterally determine if forest management projects authorized under the bill are likely to adversely affect listed species or critical habitat, without ever consulting with experts at the U.S. Fish and Wildlife Service, as required by the ESA. For projects that are subject to consultation, the bill expedites the consultation process and deems projects that fail to meet that timeline to be in compliance with the ESA. The bill expands on this “self-consultation” theme by also forcing the development of ESA regulations that would codify “alternative consultation agreements” sanctioning such practices for many types of management actions. The bill further exempts forest management activities from complying with the ESA by declaring forest activities as non-discretionary actions. This exempts forest activities from consultation requirements under the ESA, as Courts have held that consultation applies only where there is discretionary agency action to inform. The provision provides a blank check for forest projects to violate the ESA and jeopardize species and their critical habitat.

Continuing this ESA assault, the bill also exempts the Forest Service and BLM from ESA implementing regulations that require the agencies to re-initiate consultation on land and resource management plans in response to a number of changed circumstances that occur after the plan is adopted, including new species listings or critical habitat designations, or in cases where the amount of “take” (i.e. harm to listed species) specified under the forest plan is exceeded. It includes language that suggests that forest plans themselves would also be exempted from compliance with the ESA. Further Incentivizes and Prioritizes Logging: The bill diverts Secure Rural Schools Act funding from restoration activities to timber projects and creates a state-based timber production program to facilitate logging interests. Currently, a portion of SRS funds are used for collaboratively developed restoration projects designed by “resource advisory committees” (RACs) composed of diverse stakeholders. H.R. 2936 fundamentally changes this allocation by not only reducing the size and geographic diversity of the RACs from 15 statewide members to 9 local county residents, but also by requiring at least 50 percent of SRS funds to be used exclusively for stewardship projects that “include the sale of timber or other forest products.” Additionally, “self sustaining” RAC projects would be authorized for the purposes of conducting forest management in order to “generate receipts.” Eliminates Vital Conservation Safeguards: H.R. 2936 fails to contain any mandatory requirements to avoid damaging salvage logging and reforestation projects in designated roadless areas—some of our nation’s most ecologically valuable and prized recreation lands. Specifically, the bill would override the Roadless Area Conservation Rule of 2001 by allowing management activities within roadless areas if “the forest management activity . . . is consistent with the forest plan” or “the Secretary concerned determines the activity is allowed under the applicable roadless rule governing such lands.” Most forest plans have not been updated to protect inventoried roadless areas from road building and logging; consequently, the bill would make millions of acres of currently protected roadless areas—including endangered species habitat and other critically sensitive areas tied to these lands—vulnerable to harmful road building and logging. In the rare cases where plans have been updated accordingly, the latest version of this bill now allows the Secretary complete discretion to override the roadless rule. Moreover, the bill strips critical protections by requiring the Forest Service to jump through additional procedural hoops before decommissioning roads, eliminating essential survey and manage mitigation guidelines under the Northwest Forest Plan, and prohibiting the agency from applying “Eastside Screens” (forest management standards on Oregon and Washington national forests east of the Cascades designed to protect older forests and associated wildlife). Harmful provisions throughout the bill could also apply to an array of ecologically sensitive areas, since it contains no requirements to avoid wild and scenic river corridors, threatened and endangered species habitat, amongst others. Ignores Scientific Evidence that Salvage Logging Impedes Recovery and Increases Fire Risk: The bill also includes a massive categorical exclusion for any salvage logging operation up to 10,000 acres in size (40 times larger than current 250 acre limitation) following broadly defined “catastrophic events”. There have been a number of scientific articles that show that post-fire logging further harms the ecosystem, undermines recovery, and increases fire risk. The standing snags that remain after a fire provide the very nutrients needed to recover the landscape over the long haul through their slow decay, yet these are the very trees most targeted by salvage logging, which leaves behind smaller trees and slash waste that can further increase fire risk. Puts National Monuments at Risk by Overriding the Cascade Siskiyou National Monument designation: By requiring O&C lands and other protected BLM lands in western Oregon to be managed according to the Oregon and California Lands Act of 1937, H.R. 2936 would direct the BLM to manage these lands for

“permanent forest production.” This language could involve as a statutory repeal of the Cascade-Siskiyou National Monument, which was designated by Presidents Clinton and Obama through the Antiquities Act. However, it is drafted so broadly to apply to all public lands managed by the BLM (in order to shift the management of these lands toward dominant timber use) that it is possible this section also puts other national monument designations under the Antiquities Act (as well as other protections currently afforded within lands managed by BLM) directly in jeopardy. Disregards the Only Legislative Reform Needed: Title X of the bill would authorize federal disaster relief for wildfires subject to the condition that the amount of money appropriated for wildfire suppression during the current fiscal must be at least equal to the average costs of wildfire suppression over the previous ten years. While the bill would address the short-term fiscal problem of “fire-borrowing” in any given fiscal year, it does not remedy the far more serious problem that fire suppression costs are consuming an ever-growing share of the Forest Service’s overall budget. Our national forests and grasslands are a national treasure. They provide a broad range of values and benefits, including clean air and water, outstanding recreational opportunities, biodiversity, fish and wildlife habitat, forest products, erosion control, soil renewal, and more. It is critical to preserve and protect these public lands for future generations to come, and to provide the Forest Service with the resources it needs to do so. The only legislative reform needed is a budgetary one, as the most critical issue facing the Forest Service is overall declining budgets combined with “fire borrowing” to address emergency wildfire suppression costs, which has diverted funding away from other vital program areas. 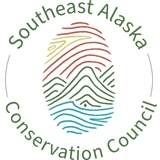 A letter opposing HR 2936 signed by 39 environmental organizations and sent to lawmakers in DC.

A letter opposing HR 2936 signed by 39 environmental organizations and sent to lawmakers in DC.