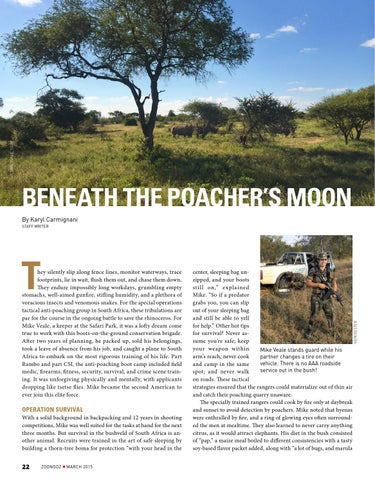 BENEATH THE POACHER’S MOON By Karyl Carmignani

hey silently slip along fence lines, monitor waterways, trace footprints, lie in wait, flush them out, and chase them down. They endure impossibly long workdays, grumbling empty stomachs, well-aimed gunfire, stifling humidity, and a plethora of voracious insects and venomous snakes. For the special operations tactical anti-poaching group in South Africa, these tribulations are par for the course in the ongoing battle to save the rhinoceros. For Mike Veale, a keeper at the Safari Park, it was a lofty dream come true to work with this boots-on-the-ground conservation brigade. After two years of planning, he packed up, sold his belongings, took a leave of absence from his job, and caught a plane to South Africa to embark on the most rigorous training of his life. Part Rambo and part CSI, the anti-poaching boot camp included field medic, firearms, fitness, security, survival, and crime scene training. It was unforgiving physically and mentally, with applicants dropping like tsetse flies. Mike became the second American to ever join this elite force.

OPERATION SURVIVAL With a solid background in backpacking and 12 years in shooting competitions, Mike was well suited for the tasks at hand for the next three months. But survival in the bushveld of South Africa is another animal. Recruits were trained in the art of safe sleeping by building a thorn-tree boma for protection “with your head in the

center, sleeping bag unzipped, and your boots sti l l on,” explained Mike. “So if a predator grabs you, you can slip out of your sleeping bag and still be able to yell for help.” Other hot tips for survival? Never assume you’re safe; keep your weapon within Mike Veale stands guard while his arm’s reach; never cook partner changes a tire on their vehicle. There is no AAA roadside and camp in the same service out in the bush! spot; and never walk on roads. These tactical strategies ensured that the rangers could materialize out of thin air and catch their poaching quarry unaware. The specially trained rangers could cook by fire only at daybreak and sunset to avoid detection by poachers. Mike noted that hyenas were enthralled by fire, and a ring of glowing eyes often surrounded the men at mealtime. They also learned to never carry anything citrus, as it would attract elephants. His diet in the bush consisted of “pap,” a maize meal boiled to different consistencies with a tasty soy-based flavor packet added, along with “a lot of bugs, and marula

Spot On: The "Purr-fect" Life for the Park's Cheetah Cubs 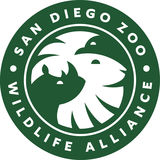