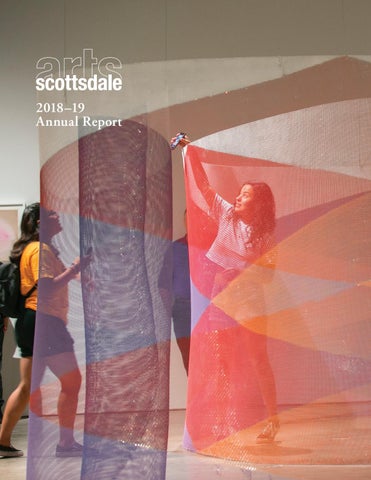 CONTENTS FROM THE CEO

SCOTTSDALE ARTS BY THE NUMBERS

SCOTTSDALE CENTER FOR THE PERFORMING ARTS

Thank You to Scottsdale Arts Board of Trustees Trustee Emeriti

FROM THE CEO An amazing end to the decade for Scottsdale Arts The 2018–19 season was a watershed moment for Scottsdale Arts. Our organization, with its illustrious history in Scottsdale, sat at a crossroads. We set out to evolve rather than revolutionize. With a goal for continued excellence and dedication to the things that have made us great for over four decades, we also opened new doors, attracted new audiences, and embraced new patrons. What a difference a year can make! Scottsdale Center for the Performing Arts renewed its focus on dance, jazz, and Americana, bringing new energy to the Center. Scottsdale Museum of Contemporary Art embraced engagement- and tech-driven exhibitions while looking back to its beginnings during a 20th anniversary celebration, drawing in a young and diverse audience that resulted in record-breaking attendance. Scottsdale Public Art expanded Canal Convergence to 10 consecutive days and moved the temporary public art event to the fall, attracting more than 270,000 community members and tourists to view light-based artworks from around the world. The decisions was also made to evolve Scottsdale Arts Education & Outreach to become a full fourth branch of our organization—Scottsdale Arts Learning & Innovation—while providing over 33,000 hours of art classes to public school students and entering an innovative clinical study about creativity’s impact on healing. I am proud of the work our amazing staff has done in 2018–19 and of the visionary and unwavering support our 84 trustees and Advisory Board members have provided. As we continue our 2019–20 season, we are beginning a new chapter for Scottsdale Arts and, indeed, for our entire community. With support for four major campus improvement projects in the recently passed municipal bond and with a vision for infrastructure growth over the next decade, we are poised to once again become the finest arts campus in the Southwest. We could not have navigated this season of change without the support of this wonderful community and want to thank you for a great year. Here’s to an even better decade ahead! Sincerely,

SCOTTSDALE ARTS BY THE NUMBERS:

times Scottsdale Arts and its branches were mentioned in the media. sales (net) in for

SCOTTSDALE CENTER FOR THE PERFORMING ARTS Scottsdale Center for the Performing Arts is more than just a performance venue in the middle of a thriving arts and cultural district. The Center serves as a platform for a wide spectrum of voices from across our community and beyond Scottsdaleâ&#x20AC;&#x2122;s borders. We present worldrenowned performers from Academy of St Martin in the Fields and Martha Graham Dance Company, to innovative emerging artists such as Mandy Harvey and Yekwon Sunwoo. The Center continues to present high-quality arts experiences that excite the heart, expand the mind, and connect residents to each other in unexpected ways. In addition to presenting artists from 10 different countries in 167 performances, hosting 100 rental events, inaugurating a two-month long flamenco cabaret series, and taking a cultural exchange group to Cuba during the 2018-19 season, the Center proudly launched the Collaborative Community Engagement Program which focuses on supporting local artists in their entrepreneurial and creative endeavors.

were donated to veterans, students, and teachers thanks to Tiffany & Bosco and Great American Title

Discovery Series: Cuba offered a unique look at Cuban culture through an array of artistic and historical perspectives. Supported by the work of local advisors and community partners, the yearlong series opened with the Arizona premiere screening of the Cuban drama, Sergio & Sergei, included distinguished speakers and international performers such as artist Coco Fusco and Havana Cuba All-Stars, and culminated in a people-to people cultural exchange trip to Cuba. Organized in partnership with Cuba Rhythm and Views, 26 adventurous patrons joined the Center’s programming director on a once-in-a-lifetime experience visiting UNESCO World Heritage Sites, art studios, performances of classical music and dance, art schools, diplomats, and the Havana Biennial 2019. Thanks to our partners—Scottsdale Civic Center Library, Phoenix Center for the Arts, Mundo Latino Entertainment, and Emancipations Arts—we were able to offer an expanded schedule of low-cost and free Discovery Series educational events.

SCOTTSDALE MUSEUM OF CONTEMPORARY ART Scottsdale Museum of Contemporary Art (SMoCA) is an artist and audience-centered institution that brings communities together under the shared philosophy that art has the power to engage our imaginations, challenge our perceptions, and inspire change. Opened in 1999, SMoCA has established itself as a leader in presenting innovative exhibitions and educational programs. SMoCA engages with emerging and established artists from around the world, and from our own community to support new commissions and encourage dialogue about the art of our time. The result is a lively community space that is a laboratory for creative thinking and new ideas. By embracing diversity, equity, and inclusion as organizational values, SMoCA, together with creative individuals across platforms, promotes cross-cultural dialogue and fosters mutual understanding and respect.

featured from the permanent collection

SCOTTSDALE PUBLIC ART Scottsdale Public Art took its mission—Live the Art. Love the Place—seriously as it continued to spearhead many public art projects, both temporary and permanent, throughout Scottsdale. Public art projects developed and completed with the City’s percent for art funds as well as that provided by developers include John Randall Nelson’s long overdue and highly anticipated One-Eyed Jack, which now serves as a gateway beacon to downtown Scottsdale’s entertainment and gallery district. Scottsdale Public Art had a busy year maintaining the City’s portable works and its public art collection. Key maintenance projects included the relocation of Robert Indiana’s LOVE sculpture and continuing to work with the City and ADOT on renovations occurring to Carolyn’s Braaksma’s Pima Freeway artwork, The Path Most Travelled, as a result of work needed to upgrade freeway infrastructure. Scottsdale Public Art continues to provide opportunities for artists and observers to engage and learn more about how public art is a vital component to creating place. Cycle 8 of INFLUX, a multi-city collaboration with Scottsdale Public Art to provide temporary public art opportunities to emerging local artists, saw in increase in partnering cities resulting in 10 participating artists. Additionally, the popular annual bike tour, Cycle the Arts, drew a record-setting crowd of 75 cyclists.

RESIDENTS OF SCOTTSDALE along with countless visitors

HIGHLIGHT EVENT: Canal Convergence Canal Convergence, a collaboration between the City of Scottsdale, Scottsdale Public Art, and Salt River Project, transitioned from a four-day event in February to a 10-day event in November. More than 277,380 attendees enjoyed 18 artworks and 175 programmatic events, made possible with the participation of 38 event partners.

hours of donated time from more than during the creation of ARIZONA! artwork

Local and national hours of

provided to Title I schools

SCHOLARSHIPS awarded to teens in the Visions program

HIGHLIGHT EVENT: Violins of Hope Scottsdale Arts Education & Outreach was privileged to host the Violins of Hope exhibition in March 2019. This collection of restored violins played by Jewish musicians during the Holocaust was artfully displayed in Center Space (formerly known as Young @ Art Gallery). Thanks to an amazing partnership with the Jewish Federation of Greater Phoenix, more than 8,000 patrons visited the exhibition. Through performances, student matinees, school programs, volunteers, and teacher professional development, this partnership earned $10,000 in ticket revenue, raised $3,000 in the gallery donation box, and sold more than $5,000 in exhibition-related merchandise in The Store @ the Center. More importantly, Violins of Hope demonstrated how collaboration across communities with shared goals generates great success. Teachers were treated to world-class Holocaust education, students met Holocaust survivors and listened to their stories, and exhibition visitors were inspired by stories of perseverance, tolerance, and hope.

A Tribute to Frances Smith Cohen This year, we lost a champion of modern dance, a passionate arts educator, and our dear friend, Frances (Fran) Cohen. Fran was not only a pillar of the Arizona dance community, but a crucial piece of the Scottsdale Arts Education & Outreach team. More than 30 years ago, she brought the “Wolf Trap Way” to Arizona as the first affiliate of this national program (which now boasts dozens of affiliates across the country). Arizona Wolf Trap uses performing arts to help young learners master a variety of skills including language development, gross and fine motor abilities, concentration, memory, and positive self-image. Led by professional teaching artists, the seven-week residency also serves to mentor classroom teachers on strategies for integrating performing arts learning with the curriculum and goals. Each year, this program impacts 2,000 preschool, Head Start, kindergarten, and first grade students across the Valley. Calling them “her babies”, Fran absolutely adored this program and loved bringing the joy of arts integration to the early childhood classroom. Scottsdale Arts is thoroughly committed to the keeping Fran’s legacy alive through the Wolf Trap program for many years to come.

SCOTTSDALE ARTS FESTIVAL BY THE NUMBERS:

PIECES OF ART donated for the auction VOLUNTEERS HOURS OF SERVICE

HOW WE EARNED IT Contract – City of Scottsdale

HOW WE SPENT IT

MEMBERS AND DONORS Scottsdale Arts is grateful for the many charitable gifts received throughout the year. You have been extremely generous, and we are honored to acknowledge your support!

GIFTS WERE MADE IN MEMORY AND/OR IN HONOR OF THOSE LISTED BELOW In Honor of Stephanie Lyon By Nationwide In Honor of David and Diana Smith By Stephanie and Frank Jacobson In Honor of Robert Smith Jr. By Diana and David Smith In Honor of Vicki Hollander Smith By Mary and Raymond Barton 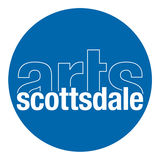