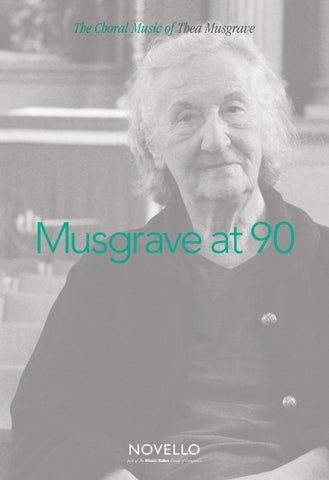 The Choral Music of Thea Musgrave

Thea Musgrave Rich and powerful musical language and a strong sense of drama have made Scottish-American composer Thea Musgrave one of the most respected contemporary composers in the Western world. Her compositions were first performed under the auspices of the BBC and at the Edinburgh International Festival. As a result, her works have been widely performed in Britain, Europe and the USA, and at the major music festivals, such as Edinburgh, Warsaw Autumn, Florence Maggio Musicale, Venice Biennale, Aldeburgh, Cheltenham and Zagreb; on most of the European and American broadcasting stations; and in many regular symphony concert series. From time to time she has conducted her own works: the premiere performance of Mary, Queen of Scots at the 1977 Edinburgh International Festival and later with the San Francisco Spring Opera; the premiere performances of The Voice of Ariadne in Britain and again in New York and Los Angeles for the New York City Opera; and many orchestral concerts (Philadelphia, San Francisco, St Paul Chamber, Los Angeles Chamber, BBC Symphony, BBC Scottish Symphony, Royal Scottish National, Hong Kong Philharmonic, Jerusalem Philharmonic, etc.). It is a measure of her talent and determination that Thea Musgrave has earned great respect for her work both as a composer and conductor at a time when these were still rather uncommon professions for a woman. Born in Edinburgh, Scotland on 27 May 1928, she studied first at the University of Edinburgh and later at the Conservatoire in Paris, where she spent four years as a pupil of Nadia Boulanger, before establishing herself back in London as a prominent member of British musical life. In 1970, she became Guest Professor at the University of California, Santa Barbara, which anchored her increasing involvement with the musical life of the United States. In 1971, she married the American opera conductor Peter Mark, and has resided in the U.S. since 1972. In 1974, she received the Koussevitzky Award, resulting in the composition of Space Play, which after its London premier was performed in New York by the Lincoln Center Chamber Players. She has also been awarded two Guggenheim Fellowships, in 1974-75, and again in 1982-83, and was recognized with honorary degrees by Old Dominion University (Virginia), Smith College, Glasgow University and in May 2004, the New England Conservatory of Music in Boston. She was awarded a CBE in The Queenâ&#x20AC;&#x2122;s New Yearâ&#x20AC;&#x2122;s Honour List in January 2002. As Distinguished Professor at Queens College, City University of New York from September 1987-2002, Musgrave has guided and interacted with many new and gifted young student composers.

An Appreciation I consider Thea Musgrave to be in the lineage of illustrious British composers of choral music over the last 100 years, which includes Benjamin Britten, Edward Elgar, Ralph Vaughan Williams and Jonathan Harvey. And like the greatest of those colleagues, Benjamin Britten, every moment of each of her works for choir is fascinating, riveting, hauntingly beautiful, and unique. I first met Thea when we were both teaching at Queens College, City University of New York, where she was a Distinguished Professor of Composition from 1987-2002. She was (and still is!) affable, charming, and humorous. I had been wondering for a long time why, when in 4/4 time, e.g., and particularly with published English music over the centuries, whole notes were tied over to eighths when it seemed obvious to me that singers should cut off on the downbeat. I posed that question to her, and, leaning forward, she said, “It’s a stupid British tradition!” It was during that period that I became acquainted with, and started performing, her choral works, first with my volunteer choir, The Canticum Novum Singers, and later with my professional choir, The New York Virtuoso Singers, subsequently conducting over a dozen of them. Her presence at rehearsals has been a blessing; her artistic vision, piercing intellect, powerful sense of drama (which infuses her works) and cordial suggestions complemented and fortified my efforts to do unmitigated justice to her works. One particularly gratifying collaborative project stands out: Her 75th birthday concert in New York followed by the creation of a CD containing all the works on the programme. Thea called on her friend, the British actor Michael York, who enthusiastically joined us as narrator in the main work on the programme: For the Time Being: Advent, which I consider to be her a cappella choral masterpiece. Her Music Thea writes in an extended tonal, highly chromatic language, and captures our attention with consummate beauty mixed with gripping tension and ambiguity. In those ways, her writing is like that of the Dutch composer Tristan Keuris, and Arnold Schoenberg, in works like Verklärte Nacht (Op.4), and Friede auf Erden (Op.13). In works such as On the Underground Set 3: A Medieval Summer, Ithaca, and Voices of Power and Protest, she interweaves both recurring and new ideas in a dazzling fashion. In this regard, her music is much like that of Richard Wagner. She often treats choirs in the same fashion and with the same emotion and passion with which Gustav Mahler handled his orchestra, relentlessly probing its inner workings, and habitually compartmentalising instruments before using them collectively. Her vocal instrumentation and textures (mostly contrapuntal) are kaleidoscopic, with unremitting revelations launched from a restless and fertile mind. Thea imbues many of her choral works with theatrical elements. Here she once again takes the lead not only from Britten, with his dramatic movement in non-operatic works such as Saint Nicolas, Noye’s Fludde, and A Hymn to the Virgin, but even from Purcell (who had a sizeable inﬂuence on Britten), with his dramatic masques involving dancing, acting and an elaborate stage design, as well as singing and playing. In her stunning anti-war work, Voices of Power and Protest, the chorus not only sings, but enacts the drama. In her recently composed The Voices of Our Ancestors for chorus, soloists, brass quintet and organ, all performers

remain offstage until the conductor enters, and in turn summons the performers who gradually assemble. In For the Time Being: Advent, she explains that the narrator should at first sound objective and matter-of-fact, but then gradually become subjective and emotional. Later she indicates that the chorus should emulate the murmur of an approaching crowd, and that their words should only occasionally be distinct. Thea makes certain to understand fully technical aspects and the abilities of each instrument for which she is writing (including the voice) before delving into the composition process. She recently asked me to recommend an organist with whom she could meet to gain an even fuller understanding about the organ, although she had already written brilliantly for it in her sumptuous The Lordâ&#x20AC;&#x2122;s Prayer. Another fascinating element of her work is how she juxtaposes poetry/text from various sources into one cohesive and coherent musical work, as Britten did in his Voices for Today, Elgar did in The Apostles, and, of course, Brahms did in his Ein Deutsches Requiem. In The Voices of Our Ancestors, Thea immersed herself in the poetry of other cultures and distant times, ultimately choosing twelve poems in nine languages that spoke with great meaning to her. And then there are the earlier charming works: Four Madrigals and John Cook, which already display evidence of a master at work, not unlike the many early tonal choral works by Elliott Carter. Very few composers throughout the history of Western music have produced brilliant pieces with every attempt. I am not acquainted with every work Thea has written. However, every one of the dozens I have conducted and heard has been spellbinding from beginning to end. She is truly one of the greatest composers that we have been blessed to have. Long live Thea! And thank you for enriching the lives of millions of people, and for creating a treasure trove of music for future generations.

Dr. Harold Rosenbaum Top: Thea Musgrave with Ashley Catling at the The Voices of Our Ancestors Right: Thea Musgrave with Finnish Composer Kaija Saariaho following a performance by the Juilliard Schoolâ&#x20AC;&#x2122;s Axiom Ensemble in New York, December 2016. Below: The class of Nadia Boulanger (centre) at the Conservatoire with Musgrave standing in the back row. Paris, 1953. Bottom right: Elizabeth Maconchy, Aaron Copland and Thea Musgrave on Aldeburgh beach, 1960

Work originally known as ‘Midnight’. It was completely revised and renamed in 2017.

I. Dreams (Robert Herrick) II. I saw a peacock with a fiery tail (Anon.) III. The Subway Piranhas (Edward Morgan)

Wild Winter II: Lamentations for Chorus and Strings (1996) SATB/Strings 19’ Vocal Score/Score/Parts – Hire Only Please note this is a re-working of ‘Wild Winter I’