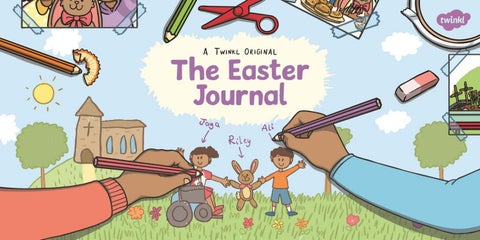 It was Good Friday and Jaya and Ali were enjoying their day off school by having a late breakfast in their pyjamas. “Slow down!” laughed Dad as the twins each wolfed down a second hot cross bun. “I need to get a photo of you with Riley Rabbit.”

Jaya and Ali giggled and posed with their class toy. “Say cheese!” said Dad. “This is going to look great in Riley’s journal.”

“Grandpa will be here soon,” said Dad, “but there’s just enough time for us to decorate some eggs!”

Just as they finished, there was a knock at the door.

“That must be Grandpa!” said the twins excitedly, rushing to greet him. Grandpa put down his bags and gave Jaya and Ali a big hug.

Jaya and Ali painted their eggs with bright colours, using a tiny brush to add some details.

“What have you brought with you?” asked Jaya. “Everything we need for our special Easter tradition!” Grandpa said with a smile.

Out on the balcony, they worked together to make a beautiful Easter garden. “I think this is going to be our best one yet!” said Ali proudly as he took a photograph.

On Saturday, the family headed to the park. Mayor Pírez had organised an Easter egg hunt for the children. “Are you eggcited?” joked Grandpa.

“Haha, good one!” said the twins, rolling their eyes.

“I’m really looking forward to finding an egg,” said Ali. “It’s been so hard giving up chocolate for Lent.” “I can’t believe you haven’t had any since Pancake Day,” said Jaya. “It’s been hard enough giving up my tablet for six weeks!”

Mayor Pírez announced the start of the Easter egg hunt. “3, 2, 1, GO!” shouted the mayor and all of the children shot off in different directions.

Ali went to look under the benches and found an egg covered in pretty yellow foil.

They rushed to show Dad and Grandpa, who had each found an egg too. “Make sure you save them,” smiled Grandpa. “No chocolate until after lunch tomorrow!”

Jaya found a purple one in the bushes by the pond.

The next morning was Easter Sunday and the family made their way to church for the sunrise service. As they entered the churchyard, the sun was just beginning to peek above the horizon.

“Christ is risen!” said Reverend Tasha as she greeted the congregation. “Truly, he is risen!” everyone replied.

Everyone gathered together and sang an Easter hymn.

Then, the children followed Mr Murphy to Sunday school while the adults went inside the church.

Dad and Grandpa listened while Reverend Tasha spoke about the life of Jesus and then said a special prayer.

Then, he showed them how to make a flower cross using sticks and colourful tissue paper.

“Let’s get Dad to take a photo later for Riley’s journal,” said Ali.

At the end of the service, everyone went out to the church garden. Reverend Tasha gave some little plants to each family. “We add flowers to our garden as a symbol of new life,” she explained to the twins.

Jaya and Ali dug two small holes as Grandpa handed a plant to each of them.

Back at home, Grandpa helped the twins as they worked on Riley’s journal. They wrote about their weekend and added their photos.

“Food’s ready!” called Dad and everyone sat down to enjoy their delicious Easter meal.

“How about some chocolate while we work…?” suggested Ali.

“No chocolate until after lunch!” said Grandpa.

“Now, who would like their chocolate eggs?” asked Dad. “I’ll get them!” grinned Jaya.

Jaya fetched the basket and started to hand the eggs out.

Jaya pulled out an empty piece of pink foil.