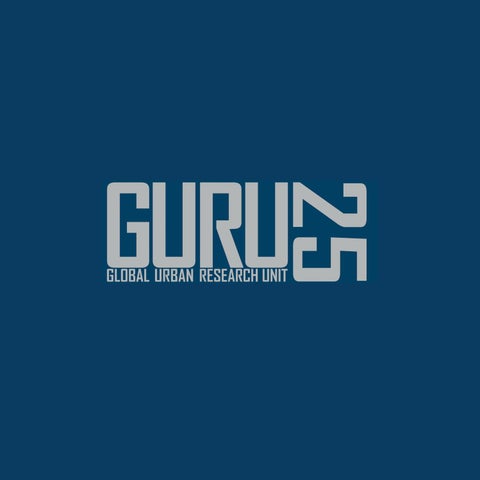 This Timeline celebrates 25 years of research and scholarship in the Global Urban Research Unit (GURU). Building on previous research strengths in the School of Architecture, Planning and Landscape (APL) at Newcastle University, GURU was founded under a different name in 1993. Today, GURU, through collaboration with other research centres from across the University and beyond, is internationally recognised for its theoretical contributions to planning, governance and urban studies, and its engagement with public policy, community development and professional practices. Over the past 25 years, it has consistently promoted academic excellence and creativity to enable progressive urban policy and practice. Since 1993, GURU members have supervised about 400 international Doctoral students who have contributed significantly to the Centre’s vibrant research environment. Current research focuses on five distinct but interrelated themes: • People, Place &amp; Politics • Infrastructure &amp; Digital Technologies • Identity, Culture &amp; Heritage • Urban Design &amp; Human Flourishing • Environmental Planning &amp; Management Year by year, the Timeline showcases selected examples of our research projects funded by a wide range of local, national and international organisations - and publications, some of which have been highly influential in shaping the debate in the field. It highlights some of GURU’s key achievements and contributions to academic and practice communities, indicating a long standing determination to generate lasting and visible impacts. The Timeline is the product of our collective efforts and especially the generous time and support given by Loes Veldpaus, Ruth Raynor, Jennifer Manuel and Sarah Delap. Professor Simin Davoudi Director of GURU

GURUâ&amp;#x20AC;&amp;#x2122;s predecessor, the Centre for Research in European Urban Environment (CREUE) was formally approved by the University, with Patsy Healey as its founding Director. Patsy joined Newcastle University in 1989 as the Head of Department of Town and Country Planning. The centre was launched following a keynote lecture by Professor David Harvey of Johns Hopkins University. CREUE worked in collaboration with the Centre for Architectural Research and Development Overseas (CARDO) that had existed since 1971 and was formally established in 1985 in the Department of Architecture with two key members: Graham Tipple and Peter Kellett. Richard Williams completed his term of office as the third Secretary General of the Association of European Schools of Planning (AESOP).

1993 saw the flourishing of the Journal of Environmental Planning &amp; Management that was established by John Benson and Ken Willis in 1992 and replaced Planning Outlook, published since 1948. The 6th Thomas Sharp Lecture was presented by John Bridge.

Patsy Healey became the 4th President of the Association of European Schools of Planning (AESOP). The ESRC-funded Seminar on Challenges in Urban Management led to the Managing Cities book in 1995. The photograph overleaf, taken at the end of the seminar, shows some of the speakers and participants.

Two new research centres were established: Centre for Urban Technology (CUT) by Simon Marvin, Steve Graham and Simon Guy, and Centre for Research in Environmental Appraisal and Management (CREAM) by Ken Willis and John Benson. Both centres continued to work collaboratively with CREUE which by then had significantly expanded its multidisciplinary and international collaboration.

CREUE hosted a seminar on social cohesion in collaboration with the newly established Institute for Urban and Rural Research (directed by John Goddard) with a keynote speech by Alain Lipietz, Director of the French National Centre for Scientific Research (CNRS). The Thomas Sharp Lecture was presented by Edward Cullinan.

The Department of Town and Country Planning celebrated the 50th Anniversary of its establishment of the first undergraduate planning degree in the UK with 31 full time students and a growing number of international students from India, Egypt and West Indies. Jo Allen became the first Chair of Town and Country Planning. The 50th anniversary was marked by the publication of a book edited by Cameron Blackhall, the acting Head of Department in 1986, with contributions from staff and alumni.

Steve Graham became consultant to the UN Centre for Human Settlements on cities and new technologies for their Cities in a Globalizing World report and became a joint founder of the journal Surveillance and Society.

Patsy Healey was awarded the 2000 Chester Rapkin Award (by Association of Collegiate Schools of Planning) for the best article in volume 19 for her article on Institutionalist analysis, communicative planning and shaping places published in Journal of Planning Education and Research. Steve Graham and Simon Marvin’s influential book Splintering Urbanism was published. Maggie Roe won the Landscape Institute’s Award for Research on Landscape and Community.

Mark Shucksmith joined GURU as Professor of Spatial Planning and was appointed Board Member of the Commission for Rural Communities.

Geoff Vigar became Director of GURU and initiated the refurbishment of GURU Space. Simin Davoudi joined GURU as Professor of Environment and Planning, and Co-Director of Institute for Research in Environment &amp; Sustainability. She completed her term as the 9th President of the Association of European Schools of Planning (AESOP). Patsy Healey was awarded the Royal Town Planning Instituteâ&amp;#x20AC;&amp;#x2122;s Gold Medal for her outstanding achievement in the field of town and country planning. David Murakami-Wood led the Report on the Surveillance Society for the UK Information Commissioner. Mark Shucksmith appointed to the Governmentâ&amp;#x20AC;&amp;#x2122;s Affordable Rural Housing Commission.

Patsy Healey’s Gold Medal was presented to her in a ceremony hosted by Newcastle University, following a seminar on Strategic Spatial Planning. Simin Davoudi was appointed member of the Department of Communities and Local Government’s Expert Panel on Housing Markets and Planning Analysis and Wibaut Visiting Professor at University of Amsterdam. Mark Shucksmith was appointed Chair of the Scottish Government’s Committee of Inquiry into Crofting, 2007-2008, which led to the Crofting Reform Act 2010. The Thomas Sharp Lecture was presented by Richard Simmons.

GURU hosted the meeting of the UN Global Research Network on Human Settlements (followed by a Newcastle Lord Mayorâ&amp;#x20AC;&amp;#x2122;s reception) to discuss the 2009 UN Habitat Global Report: Planning for Sustainable Cities with a chapter by Davoudi, Healey &amp; Vigar. The Report was launched in the House of Commons in 2009. Simin Davoudi appointed advisor to: Swedish School of Planning at BTH; Irish Social Science Platform; and EU Green Paper on Territorial Cohesion. Andrew Donaldson awarded the 2008 Ashby Prize for the most innovative paper in Environment and Planning A. Peter Kellett appointed advisor to the UK Governmentâ&amp;#x20AC;&amp;#x2122;s Foresight Programme.

A new research centre: Architecture Research Collaborative (ARC) was established in the School with Mark Dorrian as its first Director. Simin Davoudi and Maggie Roe were appointed members of the 2014 Research Excellence Framework Sub-Panel on Built Environment. Ali Madanipour appointed as the Wits-Claude Leon Distinguished Scholar at University of Witwatersrand, Johannesburg.

Law, A. 2011. Weighty histories and the industrial city: New creative economic spaces in the production of alternative heritage and identity, Intertrade, 8(356), 55-62.

MADE IN ETHIOPIA material culture of everyday life

An exhibition exploring everyday life in Ethiopia through collections of objects and images. It aims to provoke questions, challenge stereotypes and to offer insights into the rich cultural traditions of this ancient land - at a time of rapid socio-economic change and ongoing development challenges. The Long Gallery (adjacent to Hatton Gallery), Fine Art Building, Newcastle University 13th – 24th April 2015 10:00am to 5:00pm daily (except Sunday) Opening 13th April at 5:30pm. Entry is free and open to the public. Children welcome. Dr Peter Kellett is an architect and anthropologist based in the Global Urban Research Unit in the School of Architecture, Planning and Landscape at Newcastle University. In 2013 he worked in Ethiopia as a VSO volunteer at Addis Ababa University. All the objects and images on display were collected during his time in Ethiopia. University, Addis Ababa University and The exhibition is a collaboration between Newcastle Universit Voluntary Service Overseas. It is funded by an award from NiCAP – Newcastle University Institute for Creative Arts Practice.

Simin Davoudi became Director of GURU. She was appointed member of Social Science Expert Group for Department of Environment, Food &amp; Rural Affairs, and the Advisory Board of Urban Academy, setup by the City of Helsinki and Universities of Helsinki and Aalto. Roger Burrows joined GURU as Professor of Cities and appointed Trustee of Sociological Review Foundation Ltd. Steve Graham’s book ‘Vertical’ became Guardian book of the week and one of the Financial Times and Observer books of the year. Ruth Raynor and Ruth Machen joined as the first GURU Research Fellows. Mark Shucksmith appointed Trustee of Carnegie UK Trust. Dave Webb won AHRC Best Research Film Award for his work on You Can’t Move History. He organised the co-operative neighbourhoods, regional conference at Newcastle University. Tim Townshend was awarded the Royal Society prize for Public Health. The Thomas Sharp Lecture presented by Michael Hebbert.

GURU research was reorganised under five new themes that were launched at the GURU Symposium at The Core with invited speakers and panel discussions by GURU members. GURU SYMPOSIUM With themed discussions on:

2018 marked the 25th anniversary of GURU. We launched our celebratory activities by becoming the first planning school in the UK to host AESOP’s 13th Heads of Schools Conference on 20th April. About 100 delegates, representing over 45 universities from across Europe and beyond, participated in the conference, held in Newcastle University Urban Sciences Building. Speakers reflected on the past, present and future of planning research and education with a keynote speech by Patsy Healey. The conference was followed by a series of celebratory events throughout 2018:

Senior Lecturer in Planning and Director of Learning &amp; Teaching

Professor of Cities and Society

Professor of Environment &amp; Planning and Director of GURU

Director of Planning and Senior Lecturer in Planning

Reader in Landscape Planning and Faculty Dean of Postgraduate Studies

Lecturer in Planning and Urbanism

Professor of Town Planning and Director of Newcastle City Futures

Professor of Urban Design for Health

Professor of Urban Planning and Deputy Head of School

Emeritus Professor of Economics of the Environment

This Timeline celebrates 25 years of research and scholarship in the Global Urban Research Unit (GURU). Building on previous research strengths in the School of Architecture, Planning and Landscape (APL) at Newcastle University, GURU was founded under a different name in 1993.