to its end on the northern side of the park.

“Greenwich Village has always been known as the

“The gentrification we live amongst was already

Mecca of the art scene, where many talented musicians,

It is hard to imagine that the Washington Square Arch,

actors and writers began their careers. The population

which draws its influence from the Arc de Triomphe

alongside Jeremy Stein on the Stein Team of Sotheby’s

and neighborhood as a whole have experienced

in France and has become an iconic symbol for both

International Realty. “But over the last 10 years, we’ve

immense changes with the construction of many high-

seen a filling in of the gaps.”

end condominiums, making it one of New York’s most

with graffiti and vandalism 30 years ago. The sweeping

“That stretch along Seventh Avenue, which was once

changes that revitalized New York in the early 1990s

a bit unappealing with ambulances idling, will soon be

cleaned off and polished its glistening Tuckahoe marble

hue and transformed the neighborhood. The area around

of sums up a facet of change in the Village: an unsightly

the monument and Washington Square Park is referred

hospital, which served the entire neighborhood, along

to as the Gold Coast for its Greek Revival townhouses,

with many neighboring ones, is being replaced with high-

the decadent condominiums along Waverly Place and

end housing, marking a change for the better for anyone

the last bit of Fifth Avenue that runs from Union Square

looking for a great apartment to buy.”

With Great Art Comes Great Housing Pricing is steep, with a simple two-bedroom along lower Fifth Avenue hovering in the $2.5 million range, Stein

it takes a greenwich village

The style issue with IMAN, Nick Wooster, B. Akerlund and Peter Som. 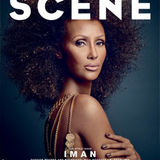