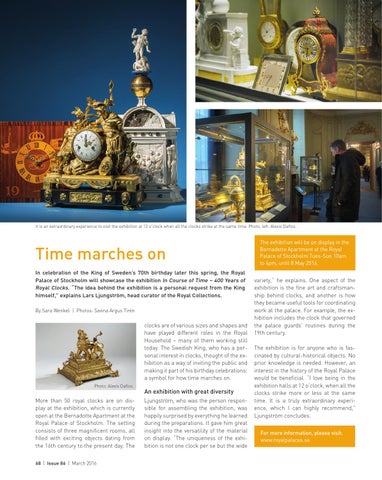 It is an extraordinary experience to visit the exhibition at 12 o’clock when all the clocks strike at the same time. Photo, left: Alexis Daflos.

Time marches on In celebration of the King of Sweden’s 70th birthday later this spring, the Royal Palace of Stockholm will showcase the exhibition In Course of Time – 400 Years of Royal Clocks. “The idea behind the exhibition is a personal request from the King himself,” explains Lars Ljungström, head curator of the Royal Collections. By Sara Wenkel | Photos: Sanna Argus Tirén

clocks are of various sizes and shapes and have played different roles in the Royal Household – many of them working still today. The Swedish King, who has a personal interest in clocks, thought of the exhibition as a way of inviting the public and making it part of his birthday celebrations: a symbol for how time marches on. Photo: Alexis Daflos.

More than 50 royal clocks are on display at the exhibition, which is currently open at the Bernadotte Apartment at the Royal Palace of Stockholm. The setting consists of three magnificent rooms, all filled with exciting objects dating from the 16th century to the present day. The 68 | Issue 86 | March 2016

An exhibition with great diversity Ljungström, who was the person responsible for assembling the exhibition, was happily surprised by everything he learned during the preparations. It gave him great insight into the versatility of the material on display. “The uniqueness of the exhibition is not one clock per se but the wide

The exhibition will be on display in the Bernadotte Apartment at the Royal Palace of Stockholm Tues-Sun 10am to 4pm, until 8 May 2016.

variety,” he explains. One aspect of the exhibition is the fine art and craftsmanship behind clocks, and another is how they became useful tools for coordinating work at the palace. For example, the exhibition includes the clock that governed the palace guards’ routines during the 19th century. The exhibition is for anyone who is fascinated by cultural-historical objects. No prior knowledge is needed. However, an interest in the history of the Royal Palace would be beneficial. “I love being in the exhibition halls at 12 o’clock, when all the clocks strike more or less at the same time. It is a truly extraordinary experience, which I can highly recommend,” Ljungström concludes. For more information, please visit: www.royalpalaces.se