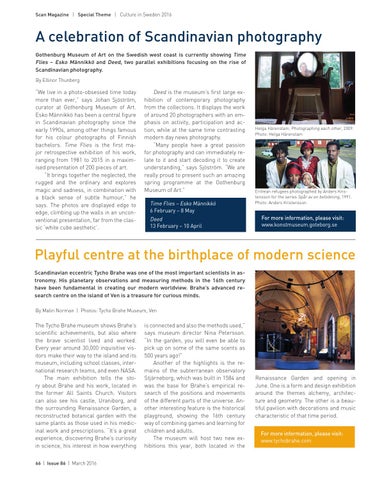 “We live in a photo-obsessed time today more than ever,” says Johan Sjöström, curator at Gothenburg Museum of Art. Esko Männikkö has been a central figure in Scandinavian photography since the early 1990s, among other things famous for his colour photographs of Finnish bachelors. Time Flies is the first major retrospective exhibition of his work, ranging from 1981 to 2015 in a maximised presentation of 200 pieces of art. “It brings together the neglected, the rugged and the ordinary and explores magic and sadness, in combination with a black sense of subtle humour,” he says. The photos are displayed edge to edge, climbing up the walls in an unconventional presentation, far from the classic ‘white cube aesthetic’.

Deed is the museum’s first large exhibition of contemporary photography from the collections. It displays the work of around 20 photographers with an emphasis on activity, participation and action, while at the same time contrasting modern day news photography. “Many people have a great passion for photography and can immediately relate to it and start decoding it to create understanding,” says Sjöström. “We are really proud to present such an amazing spring programme at the Gothenburg Museum of Art.” Time Flies – Esko Männikkö 6 February – 8 May Deed 13 February – 10 April

Playful centre at the birthplace of modern science Scandinavian eccentric Tycho Brahe was one of the most important scientists in astronomy. His planetary observations and measuring methods in the 16th century have been fundamental in creating our modern worldview. Brahe’s advanced research centre on the island of Ven is a treasure for curious minds. By Malin Norman | Photos: Tycho Brahe Museum, Ven

The Tycho Brahe museum shows Brahe’s scientific achievements, but also where the brave scientist lived and worked. Every year around 30,000 inquisitive visitors make their way to the island and its museum, including school classes, international research teams, and even NASA. The main exhibition tells the story about Brahe and his work, located in the former All Saints Church. Visitors can also see his castle, Uraniborg, and the surrounding Renaissance Garden, a reconstructed botanical garden with the same plants as those used in his medicinal work and prescriptions. “It’s a great experience, discovering Brahe’s curiosity in science, his interest in how everything 66 | Issue 86 | March 2016

is connected and also the methods used,” says museum director Nina Petersson. “In the garden, you will even be able to pick up on some of the same scents as 500 years ago!” Another of the highlights is the remains of the subterranean observatory Stjärneborg, which was built in 1584 and was the base for Brahe’s empirical research of the positions and movements of the different parts of the universe. Another interesting feature is the historical playground, showing the 16th century way of combining games and learning for children and adults. The museum will host two new exhibitions this year, both located in the

Renaissance Garden and opening in June. One is a form and design exhibition around the themes alchemy, architecture and geometry. The other is a beautiful pavilion with decorations and music characteristic of that time period. For more information, please visit: www.tychobrahe.com