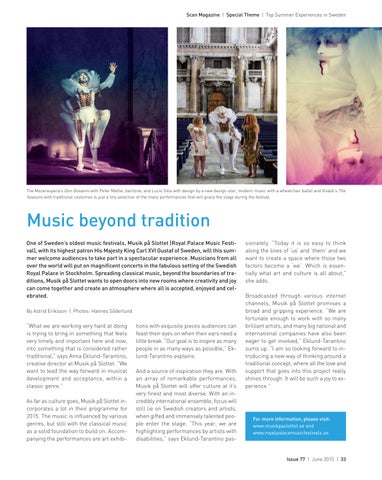 The Mozeraopera’s Don Giovanni with Peter Mattei, baritone, and Lucio Silla with design by a new design-star; modern music with a wheelchair ballet and Vivaldi’s The Seasons with traditional costumes is just a tiny selection of the many performances that will grace the stage during the festival.

Music beyond tradition One of Sweden’s oldest music festivals, Musik på Slottet (Royal Palace Music Festival), with its highest patron His Majesty King Carl XVI Gustaf of Sweden, will this summer welcome audiences to take part in a spectacular experience. Musicians from all over the world will put on magnificent concerts in the fabulous setting of the Swedish Royal Palace in Stockholm. Spreading classical music, beyond the boundaries of traditions, Musik på Slottet wants to open doors into new rooms where creativity and joy can come together and create an atmosphere where all is accepted, enjoyed and celebrated. By Astrid Eriksson | Photos: Hannes So ̈derlund

“What we are working very hard at doing is trying to bring in something that feels very timely and important here and now, into something that is considered rather traditional,” says Anna Eklund-Tarantino, creative director at Musik på Slottet. “We want to lead the way forward in musical development and acceptance, within a classic genre.” As far as culture goes, Musik på Slottet incorporates a lot in their programme for 2015. The music is influenced by various genres, but still with the classical music as a solid foundation to build on. Accompanying the performances are art exhibi-

tions with exquisite pieces audiences can feast their eyes on when their ears need a little break. “Our goal is to inspire as many people in as many ways as possible,” Eklund-Tarantino explains. And a source of inspiration they are. With an array of remarkable performances, Musik på Slottet will offer culture at it’s very finest and most diverse. With an incredibly international ensemble, focus will still lie on Swedish creators and artists, when gifted and immensely talented people enter the stage. “This year, we are highlighting performances by artists with disabilities,” says Eklund-Tarantino pas-

sionately. “Today it is so easy to think along the lines of ‘us’ and ‘them’ and we want to create a space where those two factors become a ‘we’. Which is essentially what art and culture is all about,” she adds. Broadcasted through various internet channels, Musik på Slottet promises a broad and gripping experience. “We are fortunate enough to work with so many brilliant artists, and many big national and international companies have also been eager to get involved,” Eklund-Tarantino sums up. “I am so looking forward to introducing a new way of thinking around a traditional concept, where all the love and support that goes into this project really shines through. It will be such a joy to experience.”