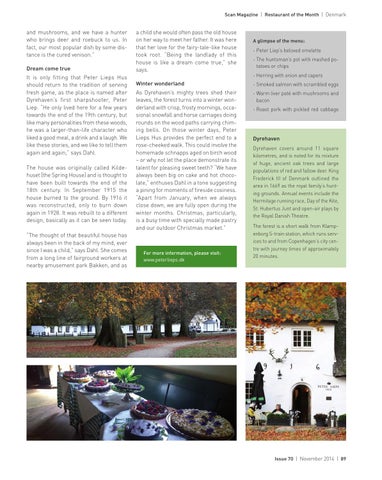 and mushrooms, and we have a hunter who brings deer and roebuck to us. In fact, our most popular dish by some distance is the cured venison.” Dream come true It is only fitting that Peter Lieps Hus should return to the tradition of serving fresh game, as the place is named after Dyrehaven’s first sharpshooter, Peter Liep. “He only lived here for a few years towards the end of the 19th century, but like many personalities from these woods, he was a larger-than-life character who liked a good meal, a drink and a laugh. We like these stories, and we like to tell them again and again,” says Dahl. The house was originally called Kildehuset [the Spring House] and is thought to have been built towards the end of the 18th century. In September 1915 the house burned to the ground. By 1916 it was reconstructed, only to burn down again in 1928. It was rebuilt to a different design, basically as it can be seen today. “The thought of that beautiful house has always been in the back of my mind, ever since I was a child,” says Dahl. She comes from a long line of fairground workers at nearby amusement park Bakken, and as

a child she would often pass the old house on her way to meet her father. It was here that her love for the fairy-tale-like house took root. “Being the landlady of this house is like a dream come true,” she says.

A glimpse of the menu: - Peter Liep’s beloved omelette - The huntsman’s pot with mashed potatoes or chips - Herring with onion and capers

As Dyrehaven’s mighty trees shed their leaves, the forest turns into a winter wonderland with crisp, frosty mornings, occasional snowfall and horse carriages doing rounds on the wood paths carrying chiming bells. On those winter days, Peter Lieps Hus provides the perfect end to a rose-cheeked walk. This could involve the homemade schnapps aged on birch wood – or why not let the place demonstrate its talent for pleasing sweet teeth? “We have always been big on cake and hot chocolate,” enthuses Dahl in a tone suggesting a pining for moments of fireside cosiness. “Apart from January, when we always close down, we are fully open during the winter months. Christmas, particularly, is a busy time with specially made pastry and our outdoor Christmas market.”

Dyrehaven Dyrehaven covers around 11 square kilometres, and is noted for its mixture of huge, ancient oak trees and large populations of red and fallow deer. King Frederick III of Denmark outlined the area in 1669 as the royal family’s hunting grounds. Annual events include the Hermitage running race, Day of the Kite, St. Hubertus Junt and open-air plays by the Royal Danish Theatre. The forest is a short walk from Klampenborg S-train station, which runs services to and from Copenhagen’s city centre with journey times of approximately 20 minutes.