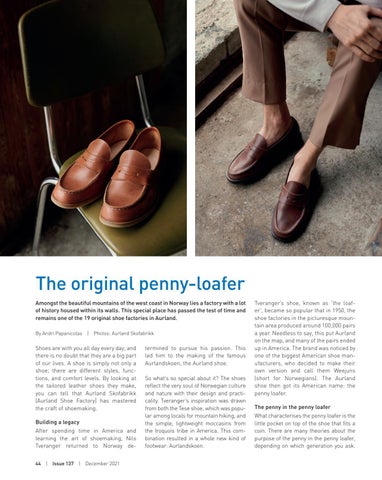 The original penny-loafer Amongst the beautiful mountains of the west coast in Norway lies a factory with a lot of history housed within its walls. This special place has passed the test of time and remains one of the 19 original shoe factories in Aurland. By Andri Papanicolas  |  Photos: Aurland Skofabrikk

Shoes are with you all day every day, and there is no doubt that they are a big part of our lives. A shoe is simply not only a shoe; there are different styles, functions, and comfort levels. By looking at the tailored leather shoes they make, you can tell that Aurland Skofabrikk (Aurland Shoe Factory) has mastered the craft of shoemaking. Building a legacy After spending time in America and learning the art of shoemaking, Nils Tveranger returned to Norway de44  |  Issue 137  |  December 2021

termined to pursue his passion. This led him to the making of the famous Aurlandskoen, the Aurland shoe. So what’s so special about it? The shoes reflect the very soul of Norwegian culture and nature with their design and practicality. Tveranger’s inspiration was drawn from both the Tese shoe, which was popular among locals for mountain hiking, and the simple, lightweight moccasins from the Iroquois tribe in America. This combination resulted in a whole new kind of footwear: Aurlandskoen.

Tveranger’s shoe, known as ‘the loafer’, became so popular that in 1950, the shoe factories in the picturesque mountain area produced around 100,000 pairs a year. Needless to say, this put Aurland on the map, and many of the pairs ended up in America. The brand was noticed by one of the biggest American shoe manufacturers, who decided to make their own version and call them Weejuns (short for Norwegians). The Aurland shoe then got its American name: the penny loafer. The penny in the penny loafer What characterises the penny loafer is the little pocket on top of the shoe that fits a coin. There are many theories about the purpose of the penny in the penny loafer, depending on which generation you ask.