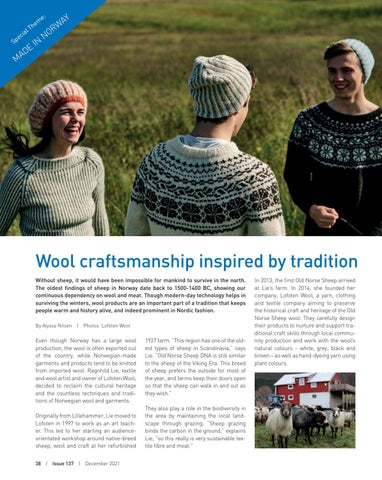 Wool craftsmanship inspired by tradition Without sheep, it would have been impossible for mankind to survive in the north. The oldest findings of sheep in Norway date back to 1500-1400 BC, showing our continuous dependency on wool and meat. Though modern-day technology helps in surviving the winters, wool products are an important part of a tradition that keeps people warm and history alive, and indeed prominent in Nordic fashion. By Alyssa Nilsen  |  Photos: Lofoten Wool

Even though Norway has a large wool production, the wool is often exported out of the country, while Norwegian-made garments and products tend to be knitted from imported wool. Ragnhild Lie, textile and wool artist and owner of Lofoten Wool, decided to reclaim the cultural heritage and the countless techniques and traditions of Norwegian wool and garments. Originally from Lillehammer, Lie moved to Lofoten in 1997 to work as an art teacher. This led to her starting an audienceorientated workshop around native-breed sheep, wool and craft at her refurbished 38  |  Issue 137  |  December 2021

1927 farm. “This region has one of the oldest types of sheep in Scandinavia,” says Lie. “Old Norse Sheep DNA is still similar to the sheep of the Viking Era. This breed of sheep prefers the outside for most of the year, and farms keep their doors open so that the sheep can walk in and out as they wish.” They also play a role in the biodiversity in the area by maintaining the local landscape through grazing. “Sheep grazing binds the carbon in the ground,” explains Lie, “so this really is very sustainable textile fibre and meat.”

In 2013, the first Old Norse Sheep arrived at Lie’s farm. In 2014, she founded her company, Lofoten Wool, a yarn, clothing and textile company aiming to preserve the historical craft and heritage of the Old Norse Sheep wool. They carefully design their products to nurture and support traditional craft skills through local community production and work with the wool’s natural colours – white, grey, black and brown – as well as hand-dyeing yarn using plant colours.