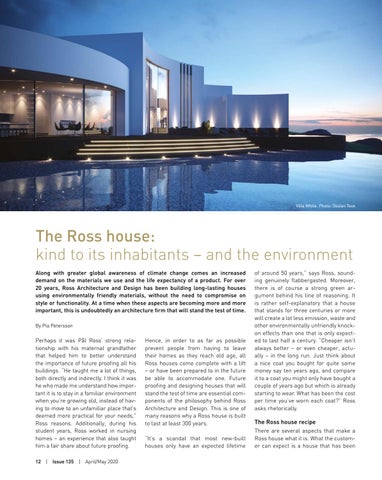 The Ross house: kind to its inhabitants – and the environment Along with greater global awareness of climate change comes an increased demand on the materials we use and the life expectancy of a product. For over 20 years, Ross Architecture and Design has been building long-lasting houses using environmentally friendly materials, without the need to compromise on style or functionality. At a time when these aspects are becoming more and more important, this is undoubtedly an architecture firm that will stand the test of time. By Pia Petersson

Perhaps it was Pål Ross’ strong relationship with his maternal grandfather that helped him to better understand the importance of future proofing all his buildings. “He taught me a lot of things, both directly and indirectly. I think it was he who made me understand how important it is to stay in a familiar environment when you’re growing old, instead of having to move to an unfamiliar place that’s deemed more practical for your needs,” Ross reasons. Additionally, during his student years, Ross worked in nursing homes – an experience that also taught him a fair share about future proofing. 12  |  Issue 135  |  April/May 2020

Hence, in order to as far as possible prevent people from having to leave their homes as they reach old age, all Ross houses come complete with a lift – or have been prepared to in the future be able to accommodate one. Future proofing and designing houses that will stand the test of time are essential components of the philosophy behind Ross Architecture and Design. This is one of many reasons why a Ross house is built to last at least 300 years. “It’s a scandal that most new-built houses only have an expected lifetime

of around 50 years,” says Ross, sounding genuinely flabbergasted. Moreover, there is of course a strong green argument behind his line of reasoning. It is rather self-explanatory that a house that stands for three centuries or more will create a lot less emission, waste and other environmentally unfriendly knockon effects than one that is only expected to last half a century. “Cheaper isn’t always better – or even cheaper, actually – in the long run. Just think about a nice coat you bought for quite some money say ten years ago, and compare it to a coat you might only have bought a couple of years ago but which is already starting to wear. What has been the cost per time you’ve worn each coat?” Ross asks rhetorically.

The Ross house recipe There are several aspects that make a Ross house what it is. What the customer can expect is a house that has been