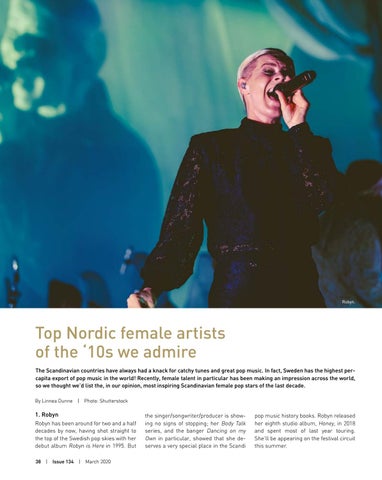 Top Nordic female artists of the ‘10s we admire The Scandinavian countries have always had a knack for catchy tunes and great pop music. In fact, Sweden has the highest percapita export of pop music in the world! Recently, female talent in particular has been making an impression across the world, so we thought we’d list the, in our opinion, most inspiring Scandinavian female pop stars of the last decade. By Linnea Dunne  |  Photo: Shutterstock

the singer/songwriter/producer is showing no signs of stopping; her Body Talk series, and the banger Dancing on my Own in particular, showed that she deserves a very special place in the Scandi

pop music history books. Robyn released her eighth studio album, Honey, in 2018 and spent most of last year touring. She’ll be appearing on the festival circuit this summer.

This issue of Scan Magazine greets the brightness of spring with a sparkling issue of cultural colour and fun. We speak to one of Sweden's perhaps most vibrant songwriters, the behind-the-scenes K-pop hit machine Cazzi Opeia, and list our top ten Nordic female pop stars from the past decade. We also cover all the cultural hotspots you shouldn't miss on your next trip to Scandinavia, including everything from Vikings and Royals to IKEA, ABBA and fascinating art. Add fjord adventures in Norway and a brand-new columnist, and we're sure you'll find that the promise of spring starts to feel warmer and brighter by the minute.