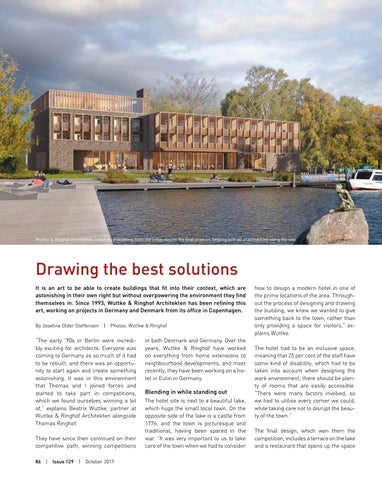 Wuttke &amp; Ringhof Architekten works on everything from the initial idea to the final product, helping with all practicalities along the way.

Drawing the best solutions It is an art to be able to create buildings that fit into their context, which are astonishing in their own right but without overpowering the environment they find themselves in. Since 1993, Wuttke &amp; Ringhof Architekten has been refining this art, working on projects in Germany and Denmark from its office in Copenhagen. By Josefine Older Steffensen  |  Photos: Wuttke &amp; Ringhof

“The early ‘90s in Berlin were incredibly exciting for architects. Everyone was coming to Germany as so much of it had to be rebuilt, and there was an opportunity to start again and create something astonishing. It was in this environment that Thomas and I joined forces and started to take part in competitions, which we found ourselves winning a lot of,” explains Beatrix Wuttke, partner at Wuttke &amp; Ringhof Architekten alongside Thomas Ringhof. They have since then continued on their competitive path, winning competitions 86  |  Issue 129  |  October 2019

in both Denmark and Germany. Over the years, Wuttke &amp; Ringhof have worked on everything from home extensions to neighbourhood developments, and most recently, they have been working on a hotel in Eutin in Germany.

Blending in while standing out The hotel site is next to a beautiful lake, which hugs the small local town. On the opposite side of the lake is a castle from 1776, and the town is picturesque and traditional, having been spared in the war. “It was very important to us to take care of the town when we had to consider

how to design a modern hotel in one of the prime locations of the area. Throughout the process of designing and drawing the building, we knew we wanted to give something back to the town, rather than only providing a space for visitors,” explains Wuttke. The hotel had to be an inclusive space, meaning that 25 per cent of the staff have some kind of disability, which had to be taken into account when designing the work environment; there should be plenty of rooms that are easily accessible. “There were many factors involved, so we had to utilise every corner we could, while taking care not to disrupt the beauty of the town.” The final design, which won them the competition, includes a terrace on the lake and a restaurant that opens up the space