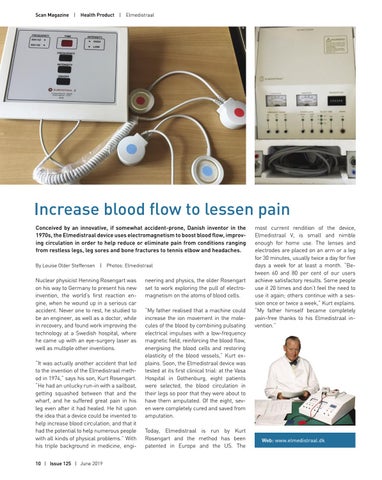 Nuclear physicist Henning Rosengart was on his way to Germany to present his new invention, the world’s first reaction engine, when he wound up in a serious car accident. Never one to rest, he studied to be an engineer, as well as a doctor, while in recovery, and found work improving the technology at a Swedish hospital, where he came up with an eye-surgery laser as well as multiple other inventions. “It was actually another accident that led to the invention of the Elmedistraal method in 1974,” says his son, Kurt Rosengart. “He had an unlucky run-in with a sailboat, getting squashed between that and the wharf, and he suffered great pain in his leg even after it had healed. He hit upon the idea that a device could be invented to help increase blood circulation, and that it had the potential to help numerous people with all kinds of physical problems.” With his triple background in medicine, engi10 | Issue 125 | June 2019

neering and physics, the older Rosengart set to work exploring the pull of electromagnetism on the atoms of blood cells. “My father realised that a machine could increase the ion movement in the molecules of the blood by combining pulsating electrical impulses with a low-frequency magnetic field, reinforcing the blood flow, energising the blood cells and restoring elasticity of the blood vessels,” Kurt explains. Soon, the Elmedistraal device was tested at its first clinical trial: at the Vasa Hospital in Gothenburg, eight patients were selected, the blood circulation in their legs so poor that they were about to have them amputated. Of the eight, seven were completely cured and saved from amputation. Today, Elmedistraal is run by Kurt  Rosengart and the method has been patented in Europe and the US. The

most current rendition of the device,  Elmedistraal V, is small and nimble enough for home use. The lenses and electrodes are placed on an arm or a leg for 30 minutes, usually twice a day for five days a week for at least a month. “Between 60 and 80 per cent of our users achieve satisfactory results. Some people use it 20 times and don’t feel the need to use it again; others continue with a session once or twice a week,” Kurt explains. “My father himself became completely pain-free thanks to his Elmedistraal invention.”