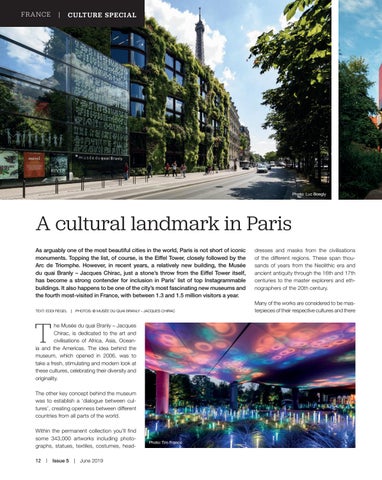 A cultural landmark in Paris As arguably one of the most beautiful cities in the world, Paris is not short of iconic monuments. Topping the list, of course, is the Eiffel Tower, closely followed by the Arc de Triomphe. However, in recent years, a relatively new building, the Musée du quai Branly – Jacques Chirac, just a stone’s throw from the Eiffel Tower itself, has become a strong contender for inclusion in Paris’ list of top Instagrammable buildings. It also happens to be one of the city’s most fascinating new museums and the fourth most-visited in France, with between 1.3 and 1.5 million visitors a year. TEXT: EDDI FIEGEL  |  PHOTOS: © MUSÉE DU QUAI BRANLY - JACQUES CHIRAC

he Musée du quai Branly – Jacques Chirac, is dedicated to the art and civilisations of Africa, Asia, Oceania and the Americas. The idea behind the museum, which opened in 2006, was to take a fresh, stimulating and modern look at these cultures, celebrating their diversity and originality. The other key concept behind the museum was to establish a ‘dialogue between cultures’, creating openness between different countries from all parts of the world. Within the permanent collection you’ll find some 343,000 artworks including photographs, statues, textiles, costumes, head12  |  Issue 5  |  June 2019

dresses and masks from the civilisations of the different regions. These span thousands of years from the Neolithic era and ancient antiquity through the 16th and 17th centuries to the master explorers and ethnographers of the 20th century. Many of the works are considered to be masterpieces of their respective cultures and there