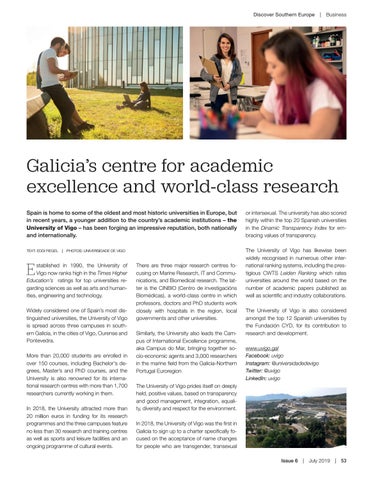 Galicia’s centre for academic excellence and world-class research Spain is home to some of the oldest and most historic universities in Europe, but in recent years, a younger addition to the country’s academic institutions – the University of Vigo – has been forging an impressive reputation, both nationally and internationally.

or intersexual. The university has also scored highly within the top 20 Spanish universities in the Dinamic Transparency Index for embracing values of transparency.

The University of Vigo has likewise been widely recognised in numerous other international ranking systems, including the prestigious CWTS Leiden Ranking which rates universities around the world based on the number of academic papers published as well as scientific and industry collaborations.

stablished in 1990, the University of Vigo now ranks high in the Times Higher Education’s ratings for top universities regarding sciences as well as arts and humanities, engineering and technology. Widely considered one of Spain’s most distinguished universities, the University of Vigo is spread across three campuses in southern Galicia, in the cities of Vigo, Ourense and Pontevedra. More than 20,000 students are enrolled in over 150 courses, including Bachelor&#39;s degrees, Master’s and PhD courses, and the University is also renowned for its international research centres with more than 1,700 researchers currently working in them. In 2018, the University attracted more than 20 million euros in funding for its research programmes and the three campuses feature no less than 30 research and training centres as well as sports and leisure facilities and an ongoing programme of cultural events.

There are three major research centres focusing on Marine Research, IT and Communications, and Biomedical research. The latter is the CINBIO (Centro de investigacións Biomédicas), a world-class centre in which professors, doctors and PhD students work closely with hospitals in the region, local governments and other universities. Similarly, the University also leads the Campus of International Excellence programme, aka Campus do Mar, bringing together socio-economic agents and 3,000 researchers in the marine field from the Galicia-Northern Portugal Euroregion

The University of Vigo is also considered amongst the top 12 Spanish universities by the Fundación CYD, for its contribution to research and development. www.uvigo.gal Facebook: uvigo Instagram: @universidadedevigo Twitter: @uvigo LinkedIn: uvigo

The University of Vigo prides itself on deeply held, positive values, based on transparency and good management, integration, equality, diversity and respect for the environment. In 2018, the University of Vigo was the first in Galicia to sign up to a charter specifically focused on the acceptance of name changes for people who are transgender, transexual Issue 6  |  July 2019  |  53